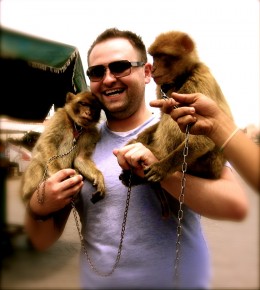 Patrick Holbrook got up close and personal with the monkeys in Morocco.

Piles of exotic spices in Morocco. Thatch-roofed houses in Ireland. The glittering night markets of Taiwan.

Wright State University’s ambassador programs allow students to see all of these things and more on two-week trips abroad during summer quarter and winter intersession. These trips, combined with a class designed to mesh with some aspect of the host country’s culture, give students an intensive immersion in a foreign place.

“The ambassador programs at Wright State are definitely one of the best and most cost-efficient ways of getting a quick immersion in a culture,” said Spencer Brannon, a political science and economics dual major who traveled to Taiwan this summer for a class in international business practices. “You don’t disrupt your scholastic career, but you still get almost the full bang of being immersed in a culture that is not your own.”

For many students, an ambassador program is a fun and practical way of studying abroad without throwing their degree off track. It is also a good opportunity to question stereotypes they hold about other cultures.

Patrick Holbrook, a political sciences major, traveled to Spain and Morocco to study human rights in both countries. He said he encountered a culture in Morocco that was nothing like he had expected.

Holbrook said that the people he met in Morocco were friendly and open and gladly engaged in dialogue about their culture. Life did not stop dead five times a day at the call to prayer. Religion was woven seamlessly into the fabric of everyday life.

Brannon said that an important part of his experience abroad was that it made him more aware of the world’s diversity.

Tiffany Fridley, who is double majoring in English and art education, agreed. Fridley went to Ireland for a class in Irish culture and music. “There is nothing better than getting to experience a culture firsthand,” she said. As a freckled redhead, Fridley fit in so well that tourists and Irish alike sometimes mistook her for a native.

Fridley said this experience has made her very excited about international travel.  She said if she studies abroad again, she will live in her host country on her own for an extended period of time. “I would want to experience a new country by myself,” she said.

She also said that the ambassador program was a wonderful introduction to studying abroad. “I think I have become addicted to traveling,” she said.

For students thinking about studying abroad with the ambassador programs, a trip to the University Center for International Education is a must. While several of this year’s winter intersession programs have closed, Megan Trickler, coordinator of Wright State’s ambassador programs, had good news. Trips to Italy, Paris and China are still open for registration.

Trickler was particularly enthusiastic about the class traveling to China. Students will visit five cities over three weeks, studying different aspects of life in China in each city.

The China program covers many subjects, while students studying in Paris will be immersed in French language and culture and students in Italy will have a choice of an Honors history course or an English class.

“Any major can take any of our programs,” said Trickler.

Ambassador programs are easier on the budget than a six-month stay in a foreign country, making them ideal for many students. The average cost for an ambassador program is between $1500 and 2000, including museum passes, accommodations and some meals.