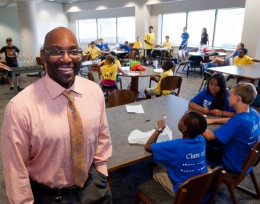 It’s the optimal word this year for the Dayton Regional STEM School.

Though the school has been open for two years, the new school year will feature a new building and a new principal.

With the first ever class of seventh graders now in the building too, David Lawrence is taking over as the chief academic officer and principal of a school that continues to grow.

“It’s great to get started with something that’s new, that’s different, that’s cutting edge and that’s sponsored by Wright State,” said Lawrence, who comes to the STEM School with 15 year’s experience in education and who spent the last five as an administrator.

A Wright State alumnus, Lawrence said he relishes the opportunity to lead the STEM school because the students hit the doors motivated to learn.

“Almost universally the high school essays I’ve read say, ‘I want to come to STEM school because I want to be a physicist, a chemist or a doctor,” said Lawrence. “Or, ‘I like to take my bike and skateboard apart and put it together so I think I want to be an engineer.’”

Lawrence relishes the chance to put youngsters on their path to achieving their goals, and whether he realized it at the time, Lawrence began his path to the STEM school a few years ago. 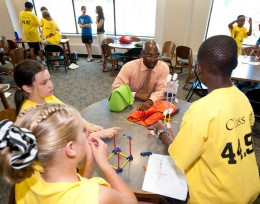 Lawrence visited with many of the new seventh graders during an activity at Wright State University.

“I started at Thurgood Marshall to try to develop a STEM high school unofficially with math and science clubs, and trebuchet and robotics challenges. We brought the AFRL (Air Force Research Lab) in a good bit too,” said Lawrence. “In doing so, I made connections with several teachers at Wright State.”

Now Lawrence is getting his chance to officially put STEM in action.

Among many subjects taught in the standard curriculum, the STEM school focuses on science, technology, engineering and mathematics. Lawrence is hoping to guide the school to a level of national recognition for excellence in inquiry-based education in these areas.

“That’s a big fancy term for, you should be able to walk in the building and see exciting, engaging things going on that will set the foundation for students to go on to STEM-related careers,” said Lawrence.

That’s the big idea. Take students from the Dayton region, prepare them with STEM- intensive curricula in high school, that in turn prepares them for the pursuit of degrees in those areas in college, and hopefully they stick around to take STEM-related jobs in the area too.

“Exactly! That’s what we’re doing and it’s not hard to find these kids,” said Lawrence. “We have to do a better job of motivating and engaging them.”

At STEM the engagement happens early and often. 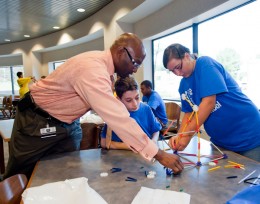 Lawrence jumped into the project when seventh graders were trying to build models of buildings that could sustain an earthquake.

We visited with Lawrence a week prior to the start of the school as a group of incoming seventh graders was working in a Wright State classroom to build models of buildings that could sustain an earthquake.

“It’s fun to see these kids construct these models and figure out what design would hold up in an earthquake, which we of course just felt a few days ago,” said Lawrence.

Lawrence said this classroom experience, with a Wright State instructor at the front of the room, is one of many examples of the unique supporting organizations STEM has at its disposal to help students succeed.

“We have the support network with AFRL, Tec^Edge, AFIT (Air Force Institute of Technology) and Wright State in particular that allows students the opportunity to see STEM in action,” said Lawrence. “To have university professors and others from these groups come to the building and support you. That’s different than in a regular class.”

If Lawrence has his way, there will be nothing regular about the classrooms in his building. It’s clear Lawrence is primed and ready to continue building great things with an eager bunch of students who just want to learn.

“I would say overwhelmingly, the kids want to be motivated, they want to work hard, and if you build a relationship with them, it almost ensures that students maximize their potential.”