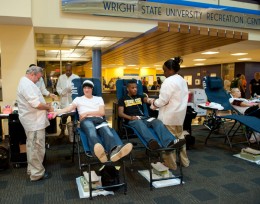 Crayons for Classrooms, park maintenance and a blood drive for the armed forces.  What do all of these things have in common?

Students, staff and faculty from Wright State University chose between these activities and more on Thursday, September 8, as a part of the Wright Commitment, a community service project organized by The Office of Student Activities and the University Activities Board.

Joseph Gibbons, philanthropy and collaborations chair for the University Activities Board, was instrumental in organizing the event. He is taking advantage of almost every opportunity offered during the Wright Commitment.

Getting to know their peers is important for incoming freshmen, who may feel a little lost in their new environment. Gibbons says the Wright Commitment was a good first-week activity for them.

Gibbons said that when students meet each other while they’re volunteering, “it’s a meaningful relationship…with these people who obviously have common interest.”

Six options were available to interested students, staff and faculty. Some of the activities were on campus, and some were in the surrounding community. Activities included:

Since getting around Dayton might be an intimidating task for a new student—or for anyone—Jesse Iott, from the Office of Student Activities, said that organizers wanted to make service opportunities available to all students, staff and faculty, no matter their schedule, interests or abilities.

“They’ve taken it a step further for the YWCA project,” said Iott. “They’re providing direct transportation from here to the shelter, from the shelter to Boonshoft, and back.”

On September 9, during Fall Fest, RTA will set up a booth with pizza and prizes for anyone who has kept their Wright Commitment day pass.

Depending on the success of the first Wright Commitment, Gibbons said he sees the Wright Commitment becoming not only an annual first-week event, but an event that recurs every quarter or semester.