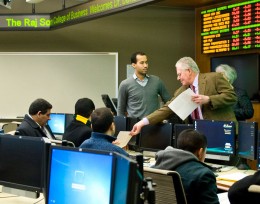 With American troops leaving, Iraq is now faced with the task of fortifying its relatively new democratic government. This week, Wright State University Center for International Education hosted a group of seven Iraqi government officials who are touring the United States to study government transparency.

Whether by developing an open and more participatory budget process or rooting out public sector corruption through the judicial system, the visitors shared a common goal: creating a transparent and accountable government in the Middle Eastern nation.

“Corruption is a corrosive force which limits economic growth and democratic process,” said Wright State political science associate professor Liam Anderson, Ph.D. “It is a particular problem in countries like Iraq that depend so heavily on a single resource, such as oil.”

The faculty explained how the United States minimizes corruption and how they teach their students to recognize and stop corruption, said Anderson. Then there was a broader discussion about the problems Iraq faces in these areas.

The delegation also looked at the roles of citizens, news media, academia and civil society in anti-corruption efforts, as well as the impact and emergence of social media and Web 2.0 technologies in nurturing an open government.

“It’s not enough to enact ethical canons and anti-corruption laws,” said John Feldmeier, Ph.D., a Wright State political science associate professor. “You must also empower citizens, interest groups and regulators with the legal protections, resources and tools to monitor and enforce these standards.”

The group later attended a presentation at Wright State’s Raj Soin College of Business and had lunch with its dean, Berkwood Farmer.

The delegation spent four days in the Dayton area as part of their three-week program. They were encouraged to experience American culture with optional excursions to the National Museum of the U.S. Air Force, the Dayton International Peace Museum, the Dayton Art Institute and local restaurants.

The program brings foreign leaders and experts to the United States for cultural and intellectual exchange. Host institutions are members of the National Council for International Visitors (NCIV), which Wright State joined last year.