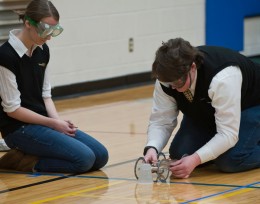 Science Olympiad gives students the opportunity to compete in 46 science and engineering events.

Wright State University is gearing up for its second Science Olympiad Invitational, to be held Saturday, Jan. 28.

The university hosted its first invitational last January and will hold another in January 2013 in preparation to hosting the National Science Olympiad Tournament in May 2013.

Click here to watch a video of last year’s invitational.

“This event will be very similar to the invitational we held last year,” said organizer Theresa Mileo, Wright State’s director of ceremonies and protocol. “The difference is that everything this year is on a larger scale. It’s going to be a bigger event.”

For example, 102 teams will compete in this tournament compared to 76 teams last year. The event will take part in 14 campus buildings compared to the 10 used last year.

The invitational has also grown in the distance teams will travel to get here. This year’s event will involve teams from 10 states, including Wisconsin, Georgia, New York and Texas.

Students compete in 46 events ranging from tests in forensics or experimental design to building balsa wood towers or robotic arms. The school-based teams prepare and practice throughout the year, then compete in regional and state tournaments. The top teams advance to the national tournament.

For the first time, the Wright State Army ROTC program will bring the Army STEM Experience to campus for students to participate in between events. In groups of four, students will enter a specialized vehicle where they will use video clips and touch-screen computers to find science-based solutions to a simulated environmental crisis.

Also new this year, teams are invited to participate in a swap meet. Students bring trinkets from dollar stores or their “junk drawers” at home to trade with students from other teams, ideally making new friends in the process.

The invitational is not only a chance for friendly competition, but also for students to explore the university’s campus.

“These students will have the opportunity to see the fabulous facilities that Wright State has to offer,” said event organizer CeAnn Chalker. “We hope to see many of these students choose Wright State for their higher education.”

Saturday’s event will begin at 8:30 a.m. and will culminate in an award ceremony at 6 p.m. at the Wright State Nutter Center. The top students in each event will be recognized and the top teams overall will be awarded trophies.

The award ceremony will be streamed live online at www.wright.edu/cats/technical/eventstream.

Science Olympiad is a national nonprofit organization whose mission is to improve the quality of science education, increase interest in science, attract more students to science careers, foster teamwork, emphasize the problem-solving aspects of science and develop a technologically literate workforce.