“Sister M.D.” to speak at the Boonshoft School of Medicine March 30 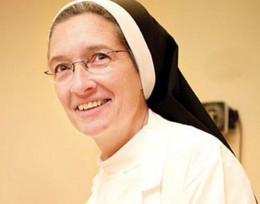 Dominican nun Sister Mary Diana Dreger will speak at 6 p.m. on March 30 on the benefits of Judeo-Christian virtues in medical practice.

In a world in which the secular and sacred seem increasingly polarized, Sister Mary Diana Dreger, O.P., M.D., a Dominican nun and practicing physician, will show how a return to Judeo-Christian virtues in medical practice is essential if medicine is to retain its historic spirit of life-affirmation and healing. She will speak on Friday, March 30, from 6 to 8 p.m., in the Gandhi Auditorium of White Hall on Wright State’s Dayton campus.

Sister Dreger entered the Dominican sisters in 1989. She completed her medical degree and residency in internal medicine in 2004 at Vanderbilt University. She now practices medicine for the underserved at the St. Thomas Family Health Center South Clinic in Nashville, Tenn.

A native New Yorker, Diana Dreger had considered a career in medicine. But she settled on teaching and attended the State University of New York at Stony Brook as a biology major, with a concentration in secondary education, followed by a master’s degree in mathematics.

After teaching for a few years, she happened to meet a group of Dominican sisters who were studying in Arlington, Va., for the summer. Dreger felt an immediate connection to the sisters, who wear the traditional black and white habit and devote their lives to teaching.

The sisters were from the St. Cecilia Motherhouse in Nashville, which was founded in 1860 to provide Catholic education for young women.  She visited the Motherhouse and found it was a perfect fit. She joined the convent in 1989, and after her first year changed her name to Sister Mary Diana.

For the next seven years, she taught the students at St. Cecilia Academy, where she was also head of the science department.

She took her final vows in 1996. One month later, the Mother Superior decided to send her to medical school. To prepare, she enrolled in a biochemistry class at Vanderbilt and started studying for the medical school entrance exam, the MCAT. She was accepted into the Vanderbilt University School of Medicine and graduated in 2001 at the age of 39.

The Dominican sisters paid for Dreger’s education, in part, so she could return to the Motherhouse and help care for some of the 270 sisters who live there. And as a physician, Dreger could contribute to the Nashville community by providing health care to the underserved population at the Saint Thomas Family Health Center South Clinic, a primary care clinic that serves the uninsured.

When she is not at the clinic, Dreger participates in the daily activities at the Motherhouse, where she serves as the primary care physician for about 80 of the sisters, who range in age from 18 to 102. Her days start at 5 a.m. when she rises for prayers, followed by Mass, chores, shared meals, an hour of recreation in the evening and a period of silence for reflection and study.