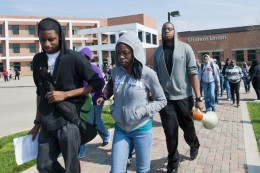 Wright State junior Jarrod Williams (at left) and other motivated students led the march to Meijer to buy Skittles and iced tea in memory of Trayvon Martin.

About 80 people, mostly students, gathered in front of the Wright State University Student Union around lunch to march and rally to stop violence Friday, March 30.

The event, “Who’s Inside the Hood,” was organized by student groups that included Black Men On the Move (BMOTM), who became angered and worried by the controversy over the shooting death of Florida teen Trayvon Martin, February 26.

“We are motivated to organize because prejudice, injustice and false assumptions are diseases across the globe,” said Jarrod Williams, BMOTM president.

Wearing hooded sweatshirts like Martin wore when he was shot, the group marched silently to the neighboring Meijer grocery story to buy the same candy and beverage Martin had bought as well.

“We need to do our part to dedicate this day to Trayvon Martin and to stop all violence,” said Williams.

Williams and others hope that public displays like the march and rally will get more people engaged and quell some of the hate speech that the controversy has led to.

The group returned to campus and held a rally in the Student Union atrium, where people spoke passionately about being more tolerant, ending violence and being part of a solution.

“We hope to foster an attitude where people start getting active instead of just tossing around ridicule that doesn’t help,” said Williams. “People promise to get involved all the time, but we don’t need any more promises, we need action, action, action.”