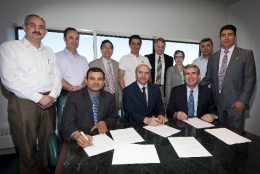 Wright State University officials have signed two agreements with a major university in Turkey that will allow the two institutions to exchange students and collaborate in research.

Wright State Provost Steven Angle and S. Narayanan, dean of the College of Engineering and Computer Science, signed the agreements with Nail Ünsal, dean, faculty of engineering at Gazi University, on Tuesday, June 16, in the Russ Engineering Center.

“Gazi is one of the premier universities in Turkey,” Narayanan said. “The top five percent of students in Turkey go to Gazi.”

Established in 1926, Gazi is a large metropolitan university in Ankara, Turkey’s capital. Narayan said more than 70,000 students are enrolled in undergraduate and graduate programs there.

Speaking through an interpreter, Ünsal said the two engineering colleges have similar programs that will make it easy to set up student exchange programs and research projects. “It will be a good cultural exchange” and will be good for relations between the United States and Turkey, he said.

He was among a half-dozen Gazi professors who visited Wright State this week to see the campus, meet with faculty and tour labs. While they were visiting here, Stephen Foster, Wright State’s associate vice president for international affairs, was in Turkey as part of a delegation of Dayton-area civic and business leaders.