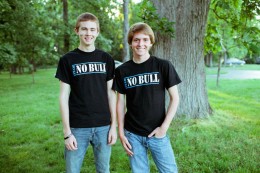 Bullying has long plagued schools and has driven students to depression, tears and even suicide.

While some see bullying as a rite of adolescence, others have begun speaking out against this traumatic form of harassment. Wright State student Tyler Gregory and high school friend Scott Hannah have achieved national fame through their anti-bullying campaign.

One year ago, Hannah and Gregory were both students at Southeastern High School in South Charleston. At the time, both were members of an organization called Family Career and Community Leaders of America (FCCLA).

“For that, we had to do a project and we weren’t really sure what to do it over,” said Gregory.

This was the case until they heard the tragic story of Jamey Rodemeyer, an openly bisexual 14-year-old who took his own life after enduring years of bullying and harassment.

Hannah talks to kids at a 4H camp.

“That could have been anybody,” said Gregory. “It could be the person we sit next to in class that also commits suicide because of the bullying epidemic.”

His death inspired Hannah and Gregory to do a video project on the dangers and consequences of bullying.

“We decided that a bully is somebody who will repeatedly hurt somebody—physically or mentally—with the intent to harm. The intention is what separates a bully from a jerk,” said Gregory.

According to the pair, this was the type of person they were initially targeting with their video project titled “Don’t Lose Hope, Stand Up to Bullying!” Their video received unexpected but enthusiastic praise after being premiered at a school assembly, and they say its impact was tremendous.

“A former bully even came up to us and said she felt sick to her stomach,” said Gregory. 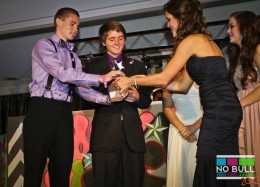 Gregory (left) and Hannah accepted an award at the No Bull Challenge banquet for their video that's inspired students across the country to stop or stand up to bullying.

Motivated by this success, Hannah and Gregory decided to expand their anti-bullying initiative. While they were still working on their video, the team caught wind of the Great American NO BULL Challenge, an amateur video competition to combat bullying and cyberbullying. Participants are required to write, film and edit their video submissions.

“It fit perfectly with our project,” said Gregory.

While Hannah and Gregory waited for the results of the competition, their local fame began to take off. Principals from regional schools had caught wind of the positive message behind their video and began contacting them to speak at assemblies.

After they premiered their video for other high schools and gave a handful of speeches, the results of the competition had come in: even though Hannah and Gregory had no prior videography experience, their video ranked in the top 15 submissions in the country.

Eight months after its initial creation, the impact of Hannah and Gregory’s video continues to be felt. In a whirlwind of national success and fame, the newly deemed “NO BULL Guys” have been touring the country, lecturing thousands of students and parents on the physical and emotional detriment bullying can cause.

“Our main focus has always been preventing suicide by alleviating bullying,” said Gregory. “A lot of suicides are the result of depression caused by bullying of some sort.”

While their message primarily targets bullied individuals, telling them “to not give up hope” or “it gets better,” everyone can learn something from the NO BULL Guys’ campaign.

“We also aim to open the eyes of bullies. We want to show the possible outcomes of their hurtful actions. Their words can have consequences,” said Hannah.

The NO BULL Guys’ momentum shows no signs of slowing—their story recently appeared on The Today Show, and they will soon be featured on The Steve Harvey Show. They have traveled the country numerous times to speak at large anti-bullying conferences and continue to speak at schools across the nation.

“We’ve gotten so much attention,” said Hannah. “A lot of people have told us that we’ve saved their life through the advice we’ve given them.”

To see the NO BULL Guys’ video or to learn more about their efforts, visit their website at http://www.thenobullguys.com/.