The Circle of Life in the Theatre 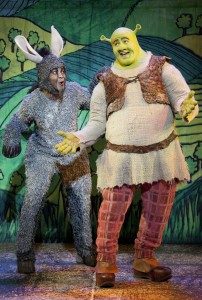 Wright State University alum Jeremy Gaston (left) is playing "The Donkey" in Shrek The Musical which played in Dayton in January.

When Shrek The Musical left town on Sunday, two Wright State alumni—Jeremy Gaston as “The Donkey” and Tiffani Robbins as “The Ugly Duckling”—traveled to their next stop on tour. While they were appearing at the Victoria Theatre last week, young hopefuls were auditioning for admission to Wright State’s highly selective Acting and Musical Theatre program.  For performers looking for a break into professional theatre, Wright State is a proven training ground.

A Springfield native, Gaston says he had not planned to go to college until he caught the acting bug during his junior year of high school and decided to audition for Wright State. “The program was fantastic for me,” he said. “I learned so much.”

He had not planned to try out for Shrek The Musical either, until a friend convinced him to audition. Gaston was hoping for a part in the chorus and was happily surprised. “It was really shocking that I got the role,” he recalls. “It is my biggest role thus far.”

According to Joe Deer, professor and head of the Bachelor of Fine Arts Musical Theatre program, quite a few former students appear in Dayton with Broadway touring companies each year. “It’s such a pleasure to see our alumni out there working.”

He attended opening night of Shrek and greeted his former students backstage after the show. In fact, he keeps track of alumni performing near and far. Several were recently on national tours of Beauty and the Beast, Wicked, Elf, and White Christmas. Four appeared on Broadway itself in the past year in The Book of Mormon, Follies, and Cinderella. Alumni also are performing on the international circuit, in The Lion King in Hong Kong and “on virtually every cruise ship,” Deer says. Many perform with leading regional theatre companies—from the Shakespeare Theatre of New Jersey to the Seattle Repertory Theatre. 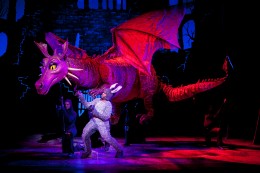 Gaston on stage in Shrek The Musical, is among several alumni who were recently on national tours of Beauty and the Beast, Wicked, Elf, and White Christmas.

The four-year Acting and Musical Theatre program is capped off by a showcase in New York City, where seniors appear before agents and casting directors for theatre, film and television productions. This year’s showcase is scheduled for April 24 at the Laurie Beechman Theatre on 42nd Street.

To help students prepare, a casting director for such shows as Glee and Wicked will offer one-on-one coaching. After the showcase for the industry, the students will repeat their performances for family and friends, including Wright State alumni in the area. President David Hopkins plans to be in the audience to cheer them along.

Once students graduate from the program, many move to New York City, Los Angeles or Chicago, where they join other alumni on stage and screen—perhaps hoping some day to become as famous as fellow Theatre major Nicole Scherzinger.