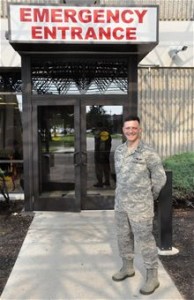 Maj. (Dr.) Alex Keller was an emergency medical technician (EMT) first before becoming a doctor in the Air Force. His enthusiasm to help others continues being a local Paramedic/Firefighter with Bethel Township Fire Department.

The major currently is in his final year of a three-year Integrated Residency in Emergency Medicine program at Wright State University. The program allows residents to be involved in the local communities in various hospitals around the Dayton area. Residents also provide medial skills to assist FBI, SWAT and EMT.

“I like helping patients that get into harm’s way,” said Keller. “I guess you can say I’m an adrenaline junky,” said the 35-year-old doctor as he concluded an emergency room night shift at Good Samaritan Hospital in Dayton with a Mountain Dew and Muscle Milk in his hands.

“I hate ties and don’t like looking through a microscope,” he said.

Wright State University was the major’s first choice when looking at an emergency medicine residency program.

“It’s a good program where I receive training and it allows me the opportunity to give back to the community while still being in the Air Force, Keller said. “I serve one month a year here at Wright-Patt Medical Center in my major’s uniform and the rest of the time in the classroom and in local hospitals out of uniform. If I never had joined the Air Force, I would not have the opportunity to do all of this.” 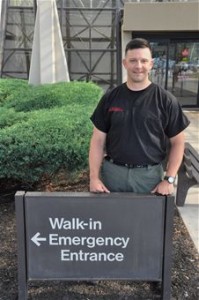 After he finishes the program, Keller will be assigned as an emergency medicine physician based on the needs of the Air Force.

Before being assigned to the 88th Medical Group, which gives him the opportunity to attend the nearby residence program, Keller was a flight surgeon at Nellis AFB, Nev. The major is the third generation of flight surgeons in his family.

With help from Jacob King, the fire chief at Wright-Patt and also at Bethel Township Fire Department, the doctor was able to get his Ohio Emergency Medical Services Certification which allows him to be a Paramedic/Firefighter here.

“He provides unique and valuable assets to this community,” said King. “Very few departments can say they have physician or even an emergency medicine resident working in their department, assisting them with training or on actual medical emergencies.”

“He brings an entirely new perspective to our members to show the full spectrum of medical care,” King continued. “Most times we only see our patients for a brief period and we don’t typically see final outcomes after they are in the emergency room. Now we can gain the knowledge and experience Dr. Keller has at the forefront of emergency medical care in the pre-hospital setting.”

“I like jumping in the rig,” Keller said, referring to an emergency vehicle. “Even though I’m a doctor, I’m treated as a paramedic, willing to give a hand when needed.”

The major has worked four shifts with the Bethel Township Fire Department so far and been on three emergency runs. Not being disappointed the major said, “A slow day for me is a good day for everyone else.”

Keller continues to receive his major’s pay while in the residency program, but receives no funds from the hospitals or Bethel Township for his services. After he finishes the program, he will be assigned as an emergency medicine physician based on the needs of the Air Force.