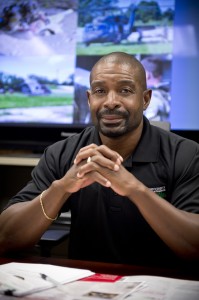 Rufus Smith, director for the National Center for Medical Readiness at Calamityville.

Wright State University has hired a permanent director for the National Center for Medical Readiness (NCMR) at Calamityville.

Rufus Smith, a retired Brigadier General from the Ohio National Guard, takes the helm this week of the university’s medical preparedness and disaster training program just as the center launches new training courses and exercises built over several months.

“I am thrilled to have Rufus Smith join the NCMR team. He is well-positioned to continue the center’s strategic growth, especially now that the center has developed several courses and built training zones,” said Robert Fyffe, Ph.D., vice president for research at Wright State, who oversees NCMR with the Wright State Research Institute. “The center will benefit from the depth and breadth of his experience as it becomes fully operational.”

Smith is experienced in strategic planning and in building teams during his tenure with the Ohio Army National Guard, most recently serving as Commanding General of the Army’s 174th Air Defense Artillery Brigade from 2006 until his retirement in 2012. He is also experienced in civilian-military responses to disasters through leading the deployment of Ohio Guard forces to Hurricane Katrina and flood emergencies, a knowledge base important to NCMR as it prepares military and civilian medical responders to work similar environments. 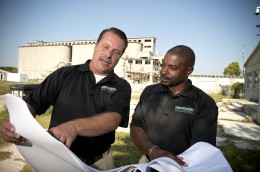 Smith (right) is experienced in strategic planning and in building teams during his tenure with the Ohio Army National Guard, most recently serving as Commanding General of the Army’s 174th Air Defense Artillery Brigade from 2006 until his retirement in 2012.

“It’s important to ensure military and civilian responders have the training they need to be fully prepared for disasters, especially when budgets are tight,” Smith said. “We as a nation have to be focused on the next disaster and on ensuring we have the resources to prepare our first responders for their worst day before that day actually arrives.”

Smith held numerous leadership positions during his 35-year career with the National Guard. He led training and resourcing of personnel to support large combat operations; led civilian-military response in both training and in homeland response, such as deployment of Guard forces to Hurricane Katrina and supporting the Ohio Health Department response to Pandemic Flu; and led the rapid, strategic growth of operations of the Air Defense Artillery Brigade.

Smith replaces Ryan Fendley, who has served as interim director for NCMR since May 2012 and now works in Wright State’s Office of the Provost. 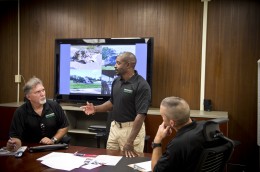 Smith with members of the NCMR team.

Smith will set the overall strategic and tactical direction of the NCMR program and provide direct oversight and management of all NCMR operations, budget, and employees.

“I look forward to working with the university and the region, communicating NCMR’s successes, challenges, and opportunities,” Smith said. “There is tremendous expertise here among the staff and we will continue to build on the work they have accomplished so far.”