Filmmaker in the Spotlight

But for his latest film, he’s taken on a new role: advocate.

Huffman is using his film to try to build awareness for an ancient Buddhist monastery facing destruction.

In The Buddhas of Mes Aynak, Huffman documents the work of archaeologists as they try to preserve and rescue artifacts from Mes Aynak, a 2,600-year-old site in Afghanistan.

Mes Aynak is the home of an ancient Buddhist complex located on the Silk Road that functioned as a trading hub and destination for Buddhists traveling on pilgrimage.

It’s also the location of the world’s second largest untapped copper reserve, with an estimated worth exceeding $100 billion.

In order to extract the copper, two Chinese companies that won the mining rights to the site will destroy the ancient complex, along with six nearby villages. The mining project will also pollute the area, making it uninhabitable.

“It’s a beautiful, awe-inspiring site,” said Huffman, who graduated with a B.F.A. in motion pictures from Wright State University in 2003 and is now an assistant professor at Northwestern University’s Medill School of Journalism, where he teaches documentary production and theory. 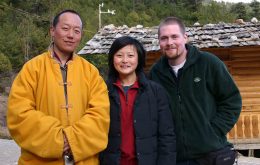 Documentary filmmakers and husband and wife Brent Huffman (right) and Xiaoli Zhou with Zum Kang Tashe (left), also referred to as the Rinpoche, a direct descendant of the seventh Dalai Lama.

After making a $3 billion bid in 2007, China Metallurgical Group Corporation (MCC) and Jiangxi Copper Corporation (JCC), both of which are owned by the Chinese government, won the mining rights to Mes Aynak for 30 years. MCC officials have said they were unaware of the Buddhist site when they were awarded the contract, according to Huffman.

For the last three years, archaeologists have performed “rescue archaeology” using primitive tools and with limited funding to extract what artifacts they can.

However, about 90 percent of the site remains underground and unexplored. Archeologists have told Huffman that it would take 30 years to properly document and excavate the site.

This year, archaeologists caught a break when MCC gave them more time to work on the site. Huffman said it appears archaeologists may have access to Mes Aynak through the end of 2013.

Although he’s still editing the documentary, Huffman is using the film to raise awareness about Mes Aynak, to try to save the site itself, or, at least, to buy the archaeologists more time.

“I couldn’t live with myself if I just sat on this film and didn’t use it to at least let an international audience know what was happening,” he said.

Huffman has received attention from around the world for his work at Mes Aynak, including from the New York Times, CNN, PBS NewsHour, The World radio program, and Tricycle: The Buddhist Review magazine.

This spring, he screened rough cuts of The Buddhas of Mes Aynak at Northwestern, the University of Chicago, Harvard University, UCLA, and the University of California, Irvine. He also plans to screen it in Toronto, Rome, and the Netherlands. Huffman hopes to complete the film this fall, then show it at film festivals and on U.S. and international television and online.

Buddhist communities in Asia have rallied to the cause, thanks in part to Huffman’s film and media appearances. In June, Huffman helped organize a protest in Los Angeles to raise awareness in Afghan and Buddhist groups in the United States about the plight of Mes Aynak.

To both help pay for the film’s production costs and generate publicity, Huffman launched a Kickstarter campaign. By spring, he had raised more than $35,000, 10 percent of which he donated to the Afghan archeologists to help them purchase digital cameras and computers.

It’s not unusual for Huffman to work so hard on a documentary. “Every film I work on is really a passion project,” he said.

Huffman studied motion pictures at Wright State, where he worked closely with professors Julia Reichert, Steve Bognar, and James Klein. “The defining moment of my young career happened at Wright State,” he said.

“I think Julia saw something in me early on,” Huffman said. “I was this shy, nervous student, and she took this interest in me and showed me that I had a talent and I could be this documentary filmmaker and have this future.”

As a student, Huffman worked as an assistant editor on Bognar and Reichert’s award-winning documentary A Lion in the House. The filmmakers also let Huffman use their camera and sound equipment while he worked as a student on a documentary about the Warren County, Ohio, prison.

“I can’t imagine that happening anywhere else,” said Huffman, who remains close to Reichert and Bognar. “The film wouldn’t have been made without that support.”

“Instructors like Steve and Julia and Jim would do anything to see projects completed and to help students,” he said. “They changed my life.”

Initially, Huffman was attracted to the Mes Aynak project because of his experience in China. He had work in China examining the country’s role around the world, and his last film, The Colony, which he produced for Al Jazeera, looked at China’s growing presence in Africa.

He was interested in learning more about the Chinese employees living and working at Mes Aynak and their interactions with Afghans. “On top of that, you’ve got this ancient Buddhist city that’s going to be destroyed,” he said. “You’ve got this frantic race to save it.” 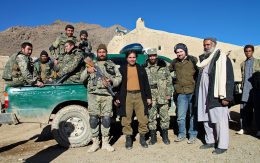 Huffman with Kabul police and residents of Chinarek, a village in volatile Logar province that is also threatened by the Chinese copper mine.

He first visited Afghanistan in 2003, falling in love with the country and its people. “It’s just an incredible place,” he said. “The people are so warm and kind and giving. I think I’m ultimately making this film for Afghanistan.”

The story of Mes Aynak, Huffman said, reflects the recent history of Afghanistan.

“Unfortunately, there’s a long history of conflict, over 30 years of continuous war,” he said. “Cultural heritage gets destroyed all the time. The ultimate victims of destruction and exploitation are the Afghan people.”

If Mes Aynak were to be preserved, he believes that it could be significant resource and destination, like Machu Picchu, and could redefine the history of Afghanistan and Buddhism.

Mes Aynak is 25 miles southeast of Kabul in Logar province. It once was the site of an al-Qaida training camp and is now surrounded by Taliban.

Huffman describes the area as “incredibly dangerous” and difficult to access. You must go through many levels of approval, including from the Afghan Ministry of Culture and the Kabul police, to get permission to visit the site. Plus, it’s in a mountainous desert region that is prone to flooding and often gets buried by snowstorms.

Because the roads are so bad, it can take up to 90 minutes to get to Mes Aynak. “And it’s a scary 90 minutes through villages that support the Taliban,” he said.

Huffman usually travels to the complex by taxi to avoid attracting attention. However, he can’t stay at the site overnight, since, after sunset, the area is regularly the target of rocket fire and landmines from the Taliban.

Despite the danger, Huffman has traveled to Afghanistan four times to work on the film since 2011 and has visited Mes Aynak 25 to 30 times.

“I’m attracted to impossible stories that feel like they can’t be told,” he said, “and this one felt like that—and it still does.”

While Mes Aynak’s culture and archeology are a significant part of the film, Huffman said the heart of the documentary is the archeologists who are risking their lives. For Huffman, documentary filmmaking provides him a means to tell people’s stories.

“I wouldn’t be able to get close to these archeologists and access this site without making this film,” he said.