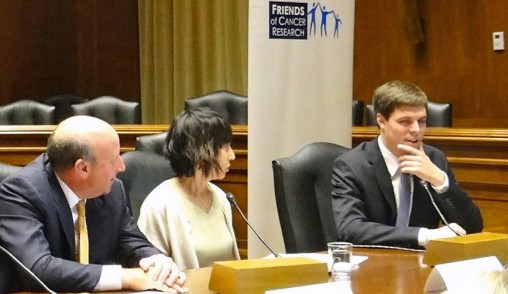 Before starting KalydecoTM, the first oral drug that treats the underlying cause of cystic fibrosis in 4 percent of the people with the genetic disorder, William Elder Jr., a second-year Wright State University Boonshoft School of Medicine student, had lost most of his sense of smell and suffered from debilitating sinus headaches. His lung function was slowly beginning to decline, leading to serious lung infections.

Cystic fibrosis is an inherited chronic disease that affects the lungs and digestive system of about 30,000 children and adults in the United States, according to the Cystic Fibrosis Foundation. A defective gene and its protein product cause the body to produce unusually thick, sticky mucus that clogs the lungs and leads to life-threatening infections. In the 1950s, few children with cystic fibrosis lived to attend school. Now, people are living into their 30s and 40s and beyond.

Despite the odds stacked against him, Elder has hope. Diagnosed at 8 years old with cystic fibrosis, Elder began following Kalydeco as it went through the U.S. Food and Drug Administration (FDA), anxiously awaiting its approval. He understood the drug’s true potential.

The efficient and rapid approach taken by the FDA to approve Kalydeco helped lead to the creation of breakthrough therapy designation, a new U.S. Food and Drug Administration (FDA) program designed to improve communication between the drug industry and the FDA. Breakthrough therapy designation is now being applied to many new drug applications to speed up the approval process. Kalydeco, in combination with the potential new drug VX-809, is in phase three clinical trials and has the potential to help thousands of people with cystic fibrosis live healthier lives.

“The speed with which Kalydeco was approved has completely changed my life. If it had taken even a year longer, I would have had a much more difficult time staying healthy as a first-year medical student,” said Elder, who will graduate from medical school in 2016. “The ability to breathe and sleep easier is certainly important, but avoiding serious infections and subsequent lung damage is what makes Kalydeco such a powerful drug. I am one of the 4 percent that this drug truly benefits.”

Elder was part of a panel that spoke in front of a congressional briefing hosted by Friends of Cancer Research in July to educate members of the U.S. Senate about new processes developed by the FDA to speed the approval of breakthrough therapies.

He shared his experience with those gathered at the congressional briefing. He vividly recalled Feb. 15, 2012, the date he first took Kalydeco. He had a large fatty meal of bacon, buttered toast and a huge glass of milk to help absorb the drug. Later, he went to bed. But he woke up at 3 a.m., noticing that something was different. But he couldn’t put his finger on it.

“I sat on the floor of my room for a while slowly breathing in and out through my nose,” he told those gathered at the congressional briefing. “And then I realized that was it. I had never been able to easily breathe out of my nose before. This was something profound.”

He recalled running down the hall of his parents’ home, knocking on their bedroom door and yelling, “Kalydeco is working!”

Over the next few days, his sense of smell improved along with his sleeping habits and his lung function. He had more energy. “For the first time in my life, I truly believe that I will live long enough to be a grandfather,” said Elder, who moved around a lot as a child but considers Denver home. “I never felt that way before.”

When he was born, the median age of survival for a child with cystic fibrosis was 27 years old. “I would never have dreamt of being a doctor if I had planned my life on the predicted median age of 27 years old,” said Elder, who wants to practice family medicine.

Kalydeco helped change his life and made his dreams possible. “I wouldn’t have been able to get through my first year of medical school at Wright State University without Kalydeco,” the Stanford University graduate said at the congressional briefing, which included Sen. Michael Bennet (D-Colo.), Jeffrey Leiden, the chief executive officer of Vertex Pharmaceuticals, Janet Woodcock, director of the FDA’s Center for Drug Evaluation and Research and other representatives from the medical community.

Speaking at a congressional briefing was a humbling experience but empowering, he explained. “Being on a panel with some of the most important people involved in creating and regulating new drugs gave me a whole new level of respect for the work they do, and I was very impressed by the focus they placed on the patient,” he said. “At the same time I was extremely excited to be able to share my story with members of Congress. I felt like my message got through to those in attendance.”

He emphasized that funding research is of the utmost importance and spoke about the work the Cystic Fibrosis Foundation does to fund research.

“The real impact of this designation is that patients get access to a new drug sooner than would otherwise be possible and may have a better health outcome as a result,” said Elder, who is a member of several student organizations at the Boonshoft School of Medicine, including the American Medical Association, Boonshoft for Health Improvement, American Medical Student Association, American Academy of Family Physicians and Ohio Academy of Family Physician among others. “Kalydeco has helped to keep me in a much better state of health, which has enabled me to succeed in medical school.”