Inside the White House 1 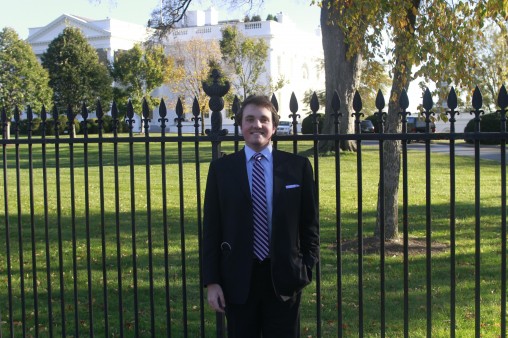 This is the first in a series of blog posts written by Wright State student Spencer Brannon describing his experiences as an intern for the Executive Office of the President of the United States at the White House.

This past summer, I was offered an internship position with the Office of the Chief Information Officer (OCIO) in the Office of Administration in the Executive Office of the President of the United States (EOP). EOP is composed of thousands of staff members who support the President, Vice President and White House, from keeping the buildings clean to crafting and implementing trade policies.

I think that for a lot of people, going through the gate on Pennsylvania Avenue is when the significance of their work first hits them. When you go through, you enter a surreal world where on your right is the ceremonial office of the Vice President and on your left is the journalism tent, where journalists stand when reporting “from the White House.”  Right in front is the West Wing. I’m lucky enough to use that gate nearly every day. When I get to the office, I often see a journalist on CNN reporting from the area I just passed.

My first day on the job involved participating in a meeting where we talked about upgrading technology used every day by some of the most senior officials in the administration. Though most of the technical details flew over my head that first day, it was clear that what was being discussed was of the highest importance.
During my second week on the job, the various staffers in my office were invited for a ceremony on the South Lawn of the White House, where President Barack Obama and the First Lady conducted a moment of silence in remembrance of the victims of 9/11. I didn’t even know my phone number yet, but I was invited to stand on the grounds with the First Family and participate in this somber recognition.

My work here has been an interesting, engaging and deeply educational experience. In the OCIO, we are responsible for maintaining and upgrading all of the unclassified technology systems used in the EOP. The level of respect the staff has for interns is impossible to overstate. My work varies from the technical—participating in meetings to determine which technology systems to upgrade, what to replace them with and when—to the financial, where I help with the end budget submissions for the office and with drafting white papers for the contracting officers.

Every day, there are several surreal moments where I am suddenly reminded that I work in the most recognizable office in the world, and I look forward to sharing more of my experiences in it.