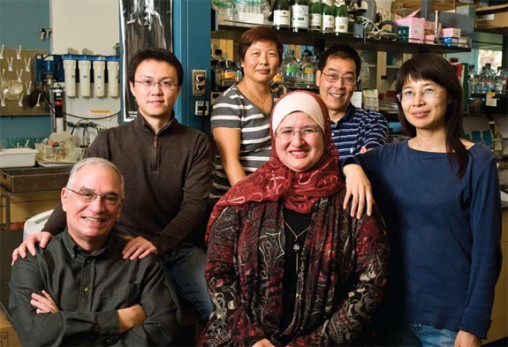 Michael Leffak, Ph.D., (left) with researchers in his lab.

The Wright State University Boonshoft School of Medicine has named Michael Leffak, Ph.D., interim chair of the Department of Biochemistry and Molecular Biology.

Prior to his appointment, Leffak served as vice chair of the Department of Biochemistry and Molecular Biology, where he is a full professor. His primary research interests include the mechanism of DNA replication initiation and pathogenic DNA damage during replication in human cells.

“With his many years of dedicated service and his long track record of NIH-funded research, Dr. Leffak is an excellent choice for interim chair of the Department of Biochemistry and Molecular Biology,” said Marjorie Bowman, M.D., M.P.A., dean of the Boonshoft School of Medicine.

Leffak has been an invited speaker at national and international scientific conferences and has served as a grant proposal reviewer for the American Cancer Society (Ohio), the American Heart Association (Ohio), the National Science Foundation and the National Institutes of Health. He is an elected Fellow of the American Association for the Advancement of Science and has been named to the editorial boards of DNA Repair and The Journal of Biological Chemistry. His laboratory is funded by the NIH.

He is a past recipient of the Boonshoft School of Medicine Dean’s Award for Teaching Excellence, the Wright State University Academy of Medicine’s Outstanding Achievement in Medical Education and Research Award for Senior Faculty and the Boonshoft School of Medicine’s Faculty Mentor Award. The WSU Board of Trustees awarded him the rank of Brage Golding Distinguished Professor of Research in 2008.

The Department of Biochemistry and Molecular Biology was founded in 1974 concurrently with the creation of the Wright State University School of Medicine. Major research interests of the department include macromolecular mechanisms, molecular genetics and the application of nuclear magnetic resonance to biomedical research. Leffak succeeds former department chair Steven Berberich, Ph.D., who has been appointed associate provost for faculty and staff affairs at Wright State University.