Did you know that the Special Collections and Archives in the Wright State University Dunbar Library has the largest collection of authentic Wright brothers materials in the world?

Nestled on the top floor of the library are priceless Wright family items that tell a story of innovation, determination and Midwestern family values that never fail to inspire visitors. 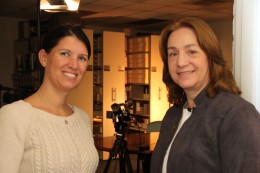 Seeking to capture those stories and others from the Gem City, C-SPAN visited the collection in November and interviewed the head of the archives, Dawne Dewey, for a segment the cable channel calls its C-SPAN Cities Tour.

C-SPAN joins the Discovery Channel, the History Channel and many authors, filmmakers and local journalists who have visited and chronicled the collection and the stories within.

C-SPAN video journalist and producer Christy Hinton described her job as an opportunity to teach viewers more than just the basic stories they learned in history books.

“It’s a chance to educate and to teach them something unique,” said Hinton. “Everybody knows who the Wright brothers are, but we want to come to these places, learn the stories and then show people something that they wouldn’t otherwise know.”

Hinton’s Dayton visit included a stop at the Paul Laurence Dunbar House, as well as an extended visit with Dewey and the array of Wright family heirlooms.

“Visiting with C-SPAN was a great chance to remind people that we are named after the Wright brothers and that the largest collection of Wright brothers materials resides in Dayton at our university,” said Dewey. “It’s also just a fantastic story to tell, and I love sharing it.”

The Library of Congress was given first choice of family items in 1948 following Orville Wright’s death. Wilbur had already passed in 1912 due to typhoid fever. Glass plate negatives, Wright brothers journals, diaries and a lot of correspondence that related directly to the invention of powered controlled flight were taken. But scads of family items like photos, report cards and correspondence remained and were later given to Wright State by the family to protect and preserve. The gesture prompted the Dayton Art Institute to reunite the brothers’ priceless medals and awards with the Wright State collection.

“There are over 4,000 photographs, and I would say they’re probably the gem of the collection, but so too are the medals, and their father’s papers and journals, which give us a palpable glimpse into the struggles and successes the brothers had that makes this story so real,” said Dewey.

“What has always amazed me about this collection is that it’s not just about flight, it’s also about a Midwest American family’s experience in Dayton, Ohio. Yes Wilber and Orville did something remarkable, but the rest of the family and the parts they played are compelling too,” added Dewey.

C-SPAN’s coverage of Wright State’s Wright brothers collection will air on C-SPAN 2 Saturday, Dec. 21, at noon and Sunday, Dec. 22, at 5 p.m. during Book TV programming in a segment called the C-SPAN Cities Tour, which will focus on Dayton and will also include a feature on Dunbar.

View the collection in person by contacting the Special Collections and Archives at http://www.libraries.wright.edu/special/ or (937) 775-2092.