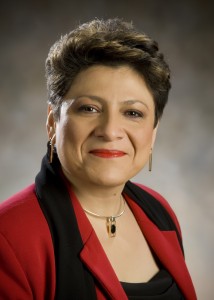 Spanish professor Damaris Serrano, Ph.D., received the most prestigious literary award from her native Panama for an essay she wrote on two development projects instrumental to 19th and 20th century Latin America.

Serrano’s essay examined the Afro-descendant diaspora in the Caribbean, Panama and the United States. The essay analyzes the role these migrants played in the construction of the first transcontinental railroad and the Panama Canal, from historical, cultural, sociological and literary perspectives. Serrano explored how the projects generated a transnational migration and promoted the building of a multicultural nation that has played a crucial role in the Latin American identity beginning in the second half of the 20th century.

“Since I live in the U.S., I want to show the very tight connection between the United States and everything that has happened in Latin America since the 19th century,” said Serrano, an associate professor of Spanish in the Department of Modern Languages. Working in the United States, Serrano said, has helped her “see Latin America with fresh new eyes.”

Her research went beyond the official histories of Panama and the Caribbean to include firsthand accounts from those who built the first transcontinental railroad and the canal.

“It was amazing to see how a sole individual from Jamaica or Barbados . . . could contribute in such a meaningful way, even though he was doing supposedly a small part of this big project,” she said. “These Afro descendants were instrumental in the completion of the dream, shared equally by Americans and Latin Americans.”

Some of the anecdotes she discovered are heartbreaking. “[Workers] were hired by thousands and they died by thousands in terrible accidents that happened in the construction,” she said.

She expressed gratitude for the assistance she received from Wright State librarians, who, she said, help make the essay possible. The Department of Modern Languages and its chair, Marie Hertzler, Ph.D., were also instrumental in giving Serrano the nurturing environment to complete her essay.

As a winner in this year’s contest, Serrano received $15,000, a certificate and a gold medal. More importantly, her essay will be published as a book in December or early 2014.

The competition is named in honor of Ricardo Miró, the national poet of Panama who served as director of the country’s National Archives and secretary of the Panamanian Academy of Language before his death in 1940.