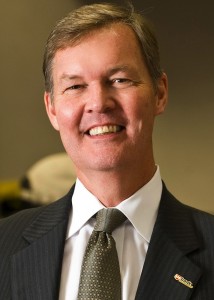 Ron Amos, president of the Dayton market of U.S. Bank and Wright State alumnus, is the new chair of the Wright State University Foundation.

The Wright State University Foundation has appointed four new trustees to its board and named Ron Amos as chair.

Amos is president of the Dayton market of U.S. Bank and has been in this position since May 1995. His banking career spans over 25 years in the Dayton market with over 20 years specializing in commercial banking activities. He earned both his Bachelor of Science in Business Administration and Master of Business Administration from Wright State University.

Amos has been active in supporting many initiatives in his native Dayton community. He has served on numerous local nonprofit boards including Dayton Children’s Hospital, United Way, YMCA and others.

The foundation has also welcomed four new trustees to its board, including:

“We are thrilled to have Ron Amos as our new foundation chair and to welcome these outstanding business and community leaders to the Wright State University Foundation Board of Trustees,” said Rebecca Cole, vice president for advancement and president of the foundation. “We appreciate their willingness to volunteer their time and talents to Wright State and to contribute to our mission of transforming the lives of our students and the communities we serve.”