Regional students immerse themselves in Chinese language and culture 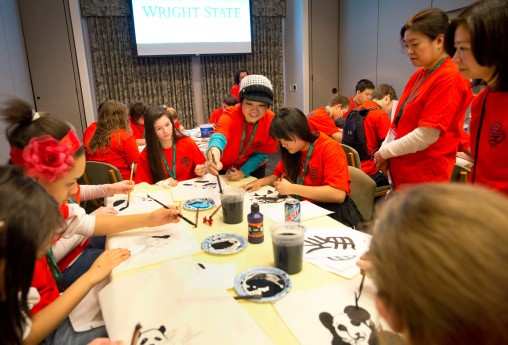 High school students learned about Chinese calligraphy during a workshop at Chinese Immersion Day on Jan. 30.

Over 100 high school and middle school students from around Ohio visited Wright State University to fortify their multilingualism. The inaugural Chinese Immersion Day on Jan. 30 gave these students the opportunity to learn more about the culture and language with engaging activities and games.

Ian Crumrine, a student from the Dayton Regional STEM School, said the workshops were a hit.

“We’ve been studying Chinese for a really long time at STEM, so it’s been really interesting and fun to celebrate the culture at some place new, at Wright State,” said Crumrine. “Learning more about the language widens my horizon.”

“Learning Chinese will help students in the job market. That’s a fact and everyone knows it,” said Chen. “Chinese speakers are all over the world—even here in Dayton. It’s crucial to know the language.”

Research has shown that language immersion has benefits such as academic achievement, literacy development and sharpened cognitive abilities. Similar research points out that immersive language teaching is one of the most effective ways to acquaint students with new cultures. 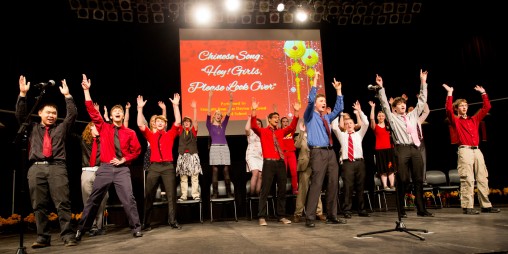 Once the workshops concluded, students participated in the Lunar New Year celebration, which featured professional Chinese artists and cultural activities organized by the Asian/Hispanic/Native American Center (AHNA) at Wright State.

“Every year Wright State celebrates the Lunar New Year, I see a steady increase in student attendance,” said Mai Nguyen, director of AHNA. “The interest in Chinese is there and it’s always growing. We collaborated with the Chinese Immersion Day to give students a way to both learn the language and experience the culture in one day.”

Throughout the year, the Department of Modern Languages also hosts Spanish, French and German Immersion Days. For more information, contact the department at (937) 775-2641.