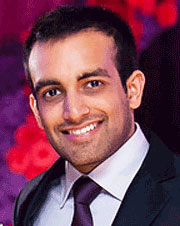 A $2.8 million annual initiative to increase the training of future physician-scientists, the HHMI Medical Research Fellows Program allows medical, dental and veterinary students to pursue mentored biomedical research at academic or nonprofit research institutions in the United States. The program provides the students an opportunity to focus on a research project full time and determine how they can incorporate research into their careers. The fellows will put their professional school coursework on hold and will spend the year conducting basic, translational or applied biomedical research.

Singhal, a Westerville, Ohio, native, will focus his research on prostate cancer at the University of Michigan Medical School in the laboratory of Arul M. Chinnaiyan, M.D., Ph.D., an HHMI investigator and the S.P. Hicks Endowed Professor of Pathology and Urology and director of the Michigan Center for Translational Pathology.

With Chinnaiyan, Singhal will investigate the mechanisms by which long-coding RNAs, or ribonucleic acid molecules, propagate prostate cancer. Also known as lncRNAs, these molecules have been found to be involved in numerous cell processes, including cancer. Chinnaiyan’s lab discovered a new lncRNA, which is overexpressed in prostate cancer. Singhal’s yearlong research project will focus on understanding how this molecule works.

“I will be digging deeper into the mechanism by which this lncRNA works and identifying if there are ways we can exploit its biology for therapeutic interventions,” said Singhal, who majored in molecular genetics and minored in business and economics at The Ohio State University, while also working as an undergraduate researcher in the Department of Molecular Genetics. “Understanding this molecule’s interactions and behavior will help us develop better therapeutics for patients with prostate cancer.”

Gary LeRoy, M.D., associate dean of student affairs and admissions at the Boonshoft School of Medicine, praised Singhal’s interest in research. Singhal has continued to conduct research at the Ohio State Wexner Medical Center, under the direction of Arnab Chakravarti, M.D., in the Department of Radiation Oncology.

“He used his talent and acquired experience in the area of research to become the founder and current president of the Boonshoft School of Medicine Student Interest Group in Oncology,” LeRoy said. “He is well respected among his peers.”

Singhal’s interest in medicine began when he was 5 years old. He followed his uncle, a surgeon, on rounds in a hospital in India. “I always found it fascinating how much he was looked upon as the leader of the community because he was a physician,” Singhal said.

Before entering medical school, Singhal worked for Eli Lilly and Company in Cleveland as a pharmaceutical primary care sales representative. “I had always wanted to become a physician, but at the same time I wanted to experience something that incorporated my medical and business interests,” he said. “Ultimately, the experience reinforced my interest in a career in medicine.”

After his first year of medical school at Wright State, he returned to India as part of the school’s Global Health Initiative program. He spent three weeks in a hospital in India and assisted in numerous surgeries, interventional procedures and health care decisions.

As a medical student, he has been active in several organizations, including Phi Rho Sigma Medical Society. He also has volunteered as a medical student with Reach Out of Montgomery County, a nonprofit organization that provides health care services, including prescription assistance, to the underserved and medically uninsured population of Montgomery County.

Singhal is looking forward to his upcoming fellowship with Chinnaiyan’s laboratory. “The HHMI Medical Research Fellows Program will provide me with a glimpse into what a research career is like,” said Singhal, who would like to pursue a residency in urology and complete a fellowship in urologic oncology. “Eventually, I hope to practice in a major academic setting, which will enable me to practice clinically in the specific field of urology. I want to teach and train future physicians and conduct research.”