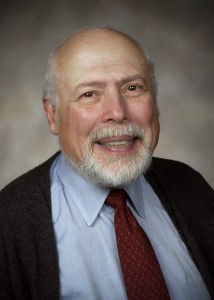 Dr. Robert (Bob) Weisman passed away on July 2, 2014, aged 77, leaving a great void in the Wright State family. For more than 30 years, as department chair, associate dean, interim dean and consummate faculty member, Bob’s contributions and his sage advice to many of us, even during his retirement, helped to establish the fabric of who we are today. He will be sorely missed by all who knew him and who benefitted, knowingly or unknowingly, from his leadership and advice.

As Dr. Michael Leffak says, “Bob instilled a sense of trust in those he counseled because he was pragmatic and, more importantly, principled. He was a man of strong religious beliefs, whose faith was translated into everyday action.”

Bob Weisman was recruited as the inaugural chair of the Department of Biochemistry, joining Wright State as professor and chair of the department in January 1977. Previously, Bob held faculty positions held at the University of Texas Health Sciences Center, San Antonio, and the Medical College of Pennsylvania, Philadelphia. A native of Kingston, N.Y. (about 90 miles north of New York City), Bob received his Bachelor of Science (with honors) in Pharmacy from Union College in Schenectady, New York, and his Ph.D. in Biochemistry from the Massachusetts Institute of Technology. Bob also held a staff fellowship at the National Institutes of Health and visiting professorships at the University of California-San Francisco and Washington University-St. Louis, in the fields of nuclear magnetic resonance and positron emission tomography — fields that are now mainstays for biomedical research.

Bob’s skills in these fledgling areas enabled him in 1985, to help establish the Kettering-Scott/Wright State University Magnetic Resonance Laboratory, bringing together scientists and clinicians in the School of Medicine and Kettering Medical Center. He served as the initial director of this laboratory and recruited several new scientists to spearhead biomedical research at Wright State using magnetic resonance technologies. Although now transformed, the Wright State Magnetic Resonance Laboratory is still in existence, and Bob’s inspiration remains a part of the laboratory.

Remarkably, during the 1980’s, while serving as chair of the department and as initial director of the newly created magnetic resonance laboratory, Bob simultaneously served as director of the then nascent Biomedical Sciences Ph.D. program, a multidisciplinary program involving multiple academic departments across the School of Medicine, the College of Science and Mathematics, and the College of Engineering and Computer Science.

As chair at our fledgling medical school, Bob derived great satisfaction from discerning the potential in new assistant professors, several of whom remain as senior faculty in the department. Bob’s mantra when recruiting new faculty was, “You have the chance to get in on the ground floor and build this department.” As his wife, Beverly, recalled, “He loved the department and was proud of you guys.” When Bob stepped down as chair in 1989, after 12 years of stellar service in which he made the department a vibrant place to work, and after his subsequent sabbatical at Washington University, Bob continued on as faculty, and in new leadership positions in both the School of Medicine and College of Science and Mathematics. During this time Bob served for many years as associate dean in the School of Medicine, driving forward the biomedical research enterprise, and as assistant, associate, and interim dean in the College of Science and Mathematics.

Even after retirement in 2004, Bob still came back to help the department by teaching in medical school courses. This activity nicely bookended Bob’s teaching contributions here, because, as Dan Organisciak remembers, when Bob arrived as chair, bringing much needed medical school experience with him, he took over the medical school course that year and proceeded to receive a highly coveted “No Dose Teaching Award” from the first-year students!

Any summary of Bob’s career, such as above, cannot do justice to the totality of his contributions. Bob was much more than a scientist, teacher, administrator, or leader. Critically, as Dan Organisciak says, “Bob really cared about Wright State, the department, and especially the faculty.” This characteristic recurs over and over again when discussing Bob’s relationships with faculty, young and old.

As Steven Berberich and others have said, “Bob had the gift of finding and nurturing, the potential in others,” and Dan Organisciak stated, from long experience, that “Bob’s ability to recognize scientific talent was exceptional, as was his administrative skill.” Jerry Alter notes that “Bob viewed his success as tightly linked to the success of those around him, he worked to enable that.” Steven Berberich had the good fortune to benefit from Bob’s mentorship both as a student and as a faculty member, remembering clearly that “Bob would take the time to listen, exploring the pros and cons of a situation from the perspective of his confidant, and, rather than giving an opinion, helped the confidant to formulate their own.” As Nick Reo, who was mentored by Bob as a newly recruited young faculty member in the magnetic resonance group, says, “Bob made a lasting impression in my life as a boss, a colleague, an advisor, and a friend. I feel privileged to have known him, and I will miss him dearly.”

This type of powerful mentorship has had a lasting impact on many of us. Recruitment and mentoring of new young faculty was very important to Bob, but he had the ability to also mentor and encourage other faculty as well. As many of us moved on through the faculty ranks, and even into administrative positions, we, like Steven Berberich says, “find myself thinking about how Bob would approach an issue.”

Everyone who knew Bob well knew that he was animated, witty, savvy and fun to be around. He was a great story-teller and loved to make others laugh.  As Dan Organisciak recounts, “Bob often said that his philosophy on life was simple: ‘Only the Best.’” This was especially true of his love of music, his choice of fine cigars (which he also taught to the faculty) and his selection of exceptional single malt scotch, which some of us have been privileged to share, over wonderful conversation and exquisite food. He and Bev loved to travel in recent retirement years especially to visit their children and grandchildren, as well as forays to Europe and other destinations. Bob’s passion for classical music was especially powerful, reflected in his years of activity as an announcer on Dayton Public Radio’s classical station, WDPR. This passion would on occasion lead to, usually merited, strong and pointed critique of performances that, in his view, fell short of standard. In particular, Bob particularly enjoyed recounting how he stood in the audience after what he felt was a lackluster symphony performance and called, “Have you no shame?” to the conductor. But he never gave up supporting the arts or trying to teach us how and why to appreciate classical music.

Ever gracious, generous, enthusiastic and full of humanity, Bob always saw the positive side of any situation. As a wonderful friend, all of his character and personality came through in abundance, leaving each of us feeling better about ourselves and our place in the grand scheme of things, even if the interaction was all too brief.