Lake Campus garden shares its bounty with the community 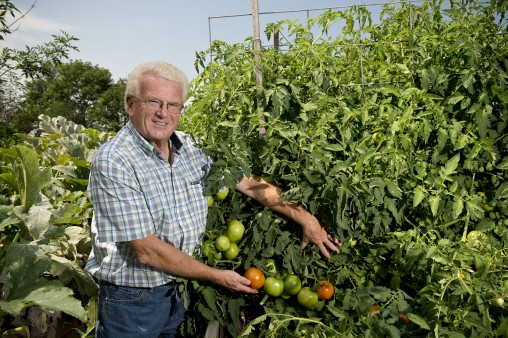 Kip Wright organizes the volunteers who tend to the Lake Campus community garden, which produces several thousands of pounds of food and helps connect students to the Mercer County community.

From the sizable squash spreading its vines far and wide to the towering tomato plants dwarfing whomever stands near, the Wright State–Lake Campus Community Garden is harvesting one of its most abundant produce yields to date.

“The season isn’t even halfway finished, and we’ve already plucked more than 500 pounds of produce,” said Kip Wright, steward of the garden and instructor for the Lake Campus Law Enforcement Academy.

Wright has spearheaded the garden since day one in 2011. The concept of the project sprouted from a growing need to further engage Lake Campus students, faculty and staff in the Mercer County community.

Once Wright teamed up with Ron Kremer, a retired accounting instructor at Lake Campus and an experienced farmer, the garden began to take shape. There were soon 12 raised beds, each standing four feet tall. Wright said they were built to last. 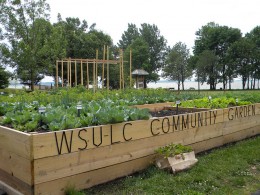 Once the beds were constructed, the dirt came next. Organic materials and waste that were composted and recycled by Lake Campus students, staff and faculty were thrown into the mix, in addition to locally donated manure.

Then came the plants.

Wright expects the garden to exceed last year’s 3,000 pounds of donated produce. The community engagement doesn’t stop at local pantries, though. Once the news of the garden’s success began to sweep through the area, the scope of the project has widened.

“In addition to donating to pantries, we have facilitated many meetings with various organized garden clubs and organic gardeners,” Wright said. “After being recognized for our efforts by the Chamber of Commerce, Ron Kramer and I have had several requests to build similar raised gardens in our seven county area, including Dayton.” 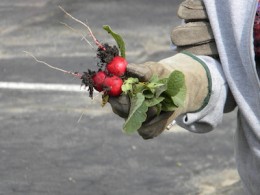 Volunteers grow more than a dozen fruits and vegetables in the community garden.

With the demand for the community garden’s produce growing faster than the plants, Wright said the volunteers often have to get creative to overcome challenges such as occasional pests and drought. Volunteers have also devised inventive ways to get everyone involved.

“Something that sets us apart from other gardens is our accessibility element. We decided to make the gardens accessible for those with disabilities,” said Wright. “Those that want to help out with the project don’t have to bend over at all to reach the plants since the beds are so high.”

This is just one of many ways those involved with the garden strive to innovate, says Greg McGlinch, one of the volunteers and a Lake Campus instructor who teaches Introduction to Agronomy, the business side of farming.

“The future of agriculture in general comes from innovation,” said McGlinch. “There’s just so much potential for gardens like this to be a learning tool. It connects the community to the basics: growing your own food.” 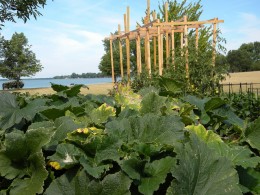 The garden is expected produce more than 3,000 pounds of produce, which will be donated to local food pantries.

Its future looks bright, with, Wright said, the garden bringing the community together in ways he never thought possible.

“I may be a little biased, but I feel the garden has created a wonderful opportunity for all of us to assemble at various times, without our titles and job descriptions,” said Wright. “We’re all dressed in blue jeans, T-shirts and garden gloves to plant, harvest, spread a little manure and see the happy, grateful faces of the consumers at our food pantries as we make our deliveries.”