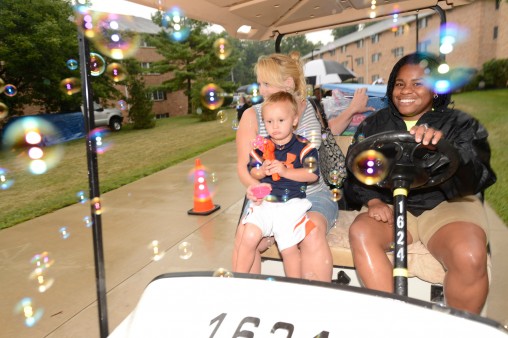 The event began with the threat of rain clouds and by 10:30 a.m. was soaked by consistent showers. More than 100 golf carts, a fleet of luggage rollers and about 440 student, staff and faculty volunteers helped move students into 29 residence halls and on-campus apartments.

Though most got wet, the positive spirits of Move-in Day were never dampened.

110 golf carts were lined up and ready first thing in the morning.

Move-in Day simply does not happen without the small army of eager volunteers.

Student volunteers were eager to lend a hand to their new classmates.

An important accessory for Move-in Day 2014: a tarp.

Many students ended up taking a rainy but pleasant “walk in the the Woods.”

Once the line moved below some tree cover the drizzle wasn’t that bad.