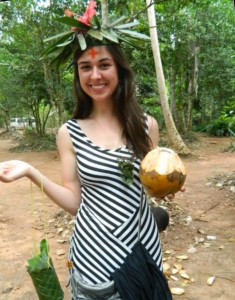 These are the reasons that students use to talk themselves out of one of the most life-changing and eye-opening experiences they will ever have: studying abroad.

But a growing effort by Wright State University to increase both scholarship money for travel and encounters with students who have already done it is under way.

It will culminate with the Study Abroad Fair Wednesday, Oct. 8, and the promotion that Wright State is now offering 400 Travel Assistance scholarships, worth $800 each, in an effort to get more students abroad. The fifth annual fair will be held in the Student Union Atrium from 11 a.m. to 3 p.m.

“You can easily talk yourself out of studying abroad. It can be a scary proposition,” said Joy Wanderi, associate director of the University Center for International Education (UCIE). “Hopefully this will help break the barriers, some of those misconceptions students can have about not being able to study abroad.”

Wanderi and Michelle Streeter-Ferrari, UCIE director, are on a mission to dispel the myths and spread the word about the undeniable benefits of studying abroad, most notably employability. 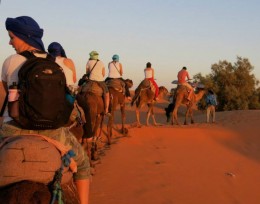 “Data from recent graduates from six months to a year after graduation show that those who participated in study abroad are more likely to get a job,” said Streeter-Ferrari.

Employers see students who’ve gone abroad as fast learners who are open-minded, adaptable, confident and independent. All of which are the invaluable and transferrable skills that have a place in virtually any work environment. Students get extra credit in the minds of employers when they have acquired a new language, particularly by immersing themselves in a foreign culture.

“International education is now part of a national and statewide conversation for how to prepare college students for the global economy,” said Streeter-Ferrari. “And students who go abroad tend to return and do well academically too.”

In fact, a study conducted in 2010 across the 35-institution university system of Georgia found that those who studied abroad had improved academic performance at home and higher graduation rates than control groups of students who did not study abroad.
In addition, an IES Abroad study in 2014 found that 90 percent of study abroad alumni found their first jobs within six months of graduation compared to 49 percent of recent college graduates in the general population who found jobs within a year.

Nearly 300 Wright State students study abroad each year. Now partners with the Institute for International Education (IIE) and its Generation Study Abroad initiative, Wright State is committed to significantly increasing that number within the next five years. 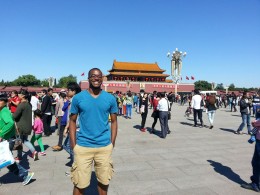 Wright State student Aaron Lane studied in China in the fall of 2013 with the Dalian Exchange Program.

But a shift in the demographics is afoot. Now more than ever, there’s a growing interest by students from all disciplines in international experiences for credit, and employers from more fields are wanting it from their future employees too.

“Now you see students from different backgrounds wanting these opportunities too, and they don’t just want to visit for a couple weeks. They want to take classes abroad, work a co-op or internship or take advantage of service-learning opportunities abroad,” said Wanderi.

At the Study Abroad Fair students can expect to meet people who have traveled abroad or lived abroad. They’ll be able to make connections not just with students who’ve done it, but also the partners who help make it happen.

Students can study abroad via exchange programs that pair them for semester-long classroom work at a partner university, ambassador programs that are faculty-led and last from two to four weeks, or through third-party education partners that help coordinate co-ops and internships that can last from three weeks to a year.

“Our fair is really going to be about students telling their stories about their time abroad. The one-on-one exchange peer to peer is the best selling point for any student,” said Wanderi. “We’re not hiding that it can be difficult, because it is, but how we overcome our fears of traveling abroad is by talking with and learning from someone who has already done it.”