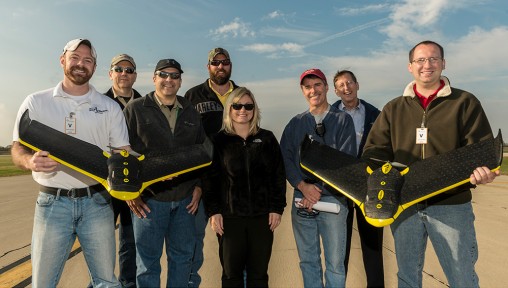 The flight’s primary purpose was to conduct modeling and simulation research in a collaborative effort between Wright State Research Institute and UASC. The data gathered will generate terrain data for use in three dimensional flight simulation environments.

“The ability to generate high-accuracy imagery while collecting data rapidly and at a low cost has broad applicability to many organizations and could even be utilized by other test sites,” said Bruce Preiss, lead research engineer at WSRI.

“The Ohio/Indiana collaborative effort reinforces the region’s commitment to being a major player in the evolving UAS industry. Wilmington Air Park has been designated as one of the region’s key sites for UAS research and development,” said Kevin Carver, executive director of the Clinton County Port Authority.

“The UASC is working to expand the number of FAA approved certificates of authority for testing and research at Wilmington Air Park and elsewhere across Ohio. We will continue to develop added infrastructure to support a safe and cost-effective research and development environment, which will provide the foundation for this emerging industry,” said Dick Honneywell, UASC’s executive director.

A joint venture between the states of Ohio and Indiana, the UASC works to advance UAS commercialization and support flight operations for government and agencies. It offers a mix of services and test ranges and capabilities to support research, development and evaluation of unmanned aircraft systems.

The UAS market is projected to be an $82 billion industry with a potential to create approximately 100,000 jobs over the next 10 years.

“We are pleased to be supporting Wright State Research Institute in their research efforts. This week’s flight operation represents yet another positive step forward to increase UAS development capabilities and overall activity in the state of Ohio,” said Honneywell.