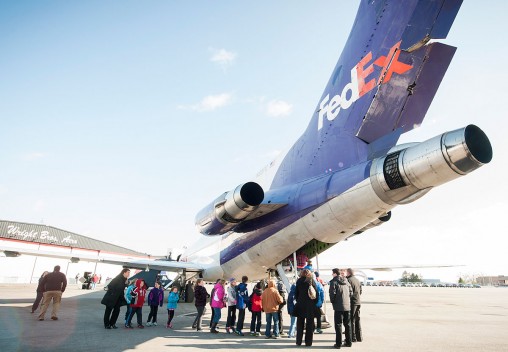 Beavercreek schoolchildren board a Boeing 727 that will be used as a STEM classroom as part of a collaborative involving Wright State, Clark State Community College and Beavercreek City Schools.

A former FedEx Boeing 727 landed at Dayton International Airport Wednesday, taxied to the Wright Brothers Aero and was promptly donated to a local school system that plans to outfit it as a STEM (science, technology, engineering and mathematics) classroom.

Beavercreek City Schools received the jet from FedEx and is joined by Wright State University, Clark State Community College and the airport in support of the project — the Beavercreek STEM Jet Collaborative. The collaborative will make the jet available for interested schools throughout the region.

The idea is to train students at the middle school, high school and post-secondary level in aviation and aerospace. The learning needs of elementary students through the region will be targeted as well, district officials said.

“Wright State’s National Center for Medical Readiness, Aerospace Professional Development Center and Regional STEM Collaborative are glad to be on board with the STEM Jet plan,” said Barlow.  “We are all interested in the use of the jet as both a STEM classroom and a resource for disaster response. We are excited about the regional approach to STEM education and we’re happy to be part of the collaborative.”

The project is funded through sponsorships, grants and private donations.

The jet will take up residence at the Dayton International Airport while it is renovated into a classroom. When that’s accomplished, the vehicle will be moved to Wright State University property, potentially Calamityville. The process will take up to two years, and a location will be finalized during that time, said Barlow.