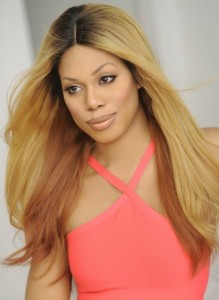 “Orange Is the New Black” star Laverne Cox will give a talk on “Ain’t I a Woman: My Journey to Womanhood” as part of Wright State’s Presidential Lecture Series on Dec. 2.

Cox will give a talk on “Ain’t I a Woman: My Journey to Womanhood” on Tuesday, Dec. 2, at 7 p.m. in the Wright State Nutter Center. Cox’s lecture is co-sponsored by Wright State Allies.

Cox is a critically acclaimed actress best known for her groundbreaking role as Sophia Burset, an incarcerated African-American transgender woman, in the Netflix original series “Orange Is the New Black.” She is the first trans woman of color to have a leading role on a mainstream scripted television show.

She was nominated for an Emmy award for Outstanding Guest Actress in a Comedy Series and received the 2013 Dorian Rising Star Award for her work on “Orange Is the New Black.” Time magazine listed Sophia Burset the fourth most influential fictional character of 2013.

In 2013, she won a Best Supporting Actress award at the Massachusetts Independent Film Festival for her work in “Musical Chairs,” directed by Susan Seidelman. Cox has also appeared on “Law and Order,” “Law and Order: SVU,” HBO’s “Bored to Death” and in the independent films “Carla” and “The Exhibitionists.” She has roles in the forthcoming films “36 Saints” and “Grand Street.”

In addition to her critically acclaimed work as an actress, Cox is a popular public speaker, encouraging others to move beyond gender expectations and live more authentically.

Cox was named one of Out magazine’s “Out 100,” one of the country’s top 50 trans icons by the Huffington Post and one of Metro Source magazine’s “55 People We Love.” Her critical writings have appeared in the Advocate and the Huffington Post. A graduate of Marymount Manhattan College, Cox holds a degree in fine arts.