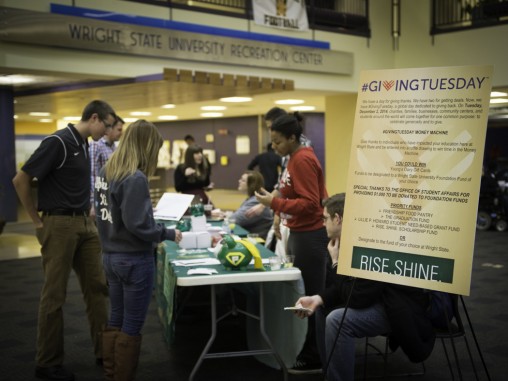 #GivingTuesday is much more than a holiday. It’s a movement.

On Tuesday, Dec. 2, Wright State students, staff, faculty and community members came together in the Student Union Atrium to celebrate Giving Tuesday with generosity and activity. By the end of the day, $6,188 had been donated to various Wright State funds.

The event’s charitable participants were able to donate to one or multiple funds such as the Friendship Food Pantry, the Graduation Fund, the Lillie P. Howard Student Need-Based Grant Fund, the Rise. Shine. Campaign or a fund of the participant’s choice.

Kari Simpson, graduate assistant for the Office of Annual Giving, said philanthropy was at the heart of Giving Tuesday.

“Philanthropy is so important because it is not only a way to give back to something important to you, but also a way to help others,” said Simpson. “By donating to a cause or organization, you are able to make a difference. Without philanthropy, many of Wright State’s organizations would not be here.”

One of the highlights of the event was a cash cube — an inflatable chamber that contained $1,000 of donated money from Student Affairs for participants to snatch up as quickly as possible. The money grabbed while in the cash cube was donated to a fund of the participant’s choosing.

Participants took the opportunity to write unselfies — pictures taken with notes of selflessness and gratitude — to the Wright State community, saying why they chose to donate and participate in Giving Tuesday:

“It’s a breath of fresh air amidst all of the consumerism of the holidays,” Bingham said. “It feels good to give back.”

For more information on how to donate to Wright State University or a specific organization or fund, contact Annual Giving at (937) 775-3958 or amy.n.jones@wright.edu.

Volunteers from the Student Alumni Association and Wright State Giving organized a flurry of activity in the Student Union Atrium.

Emily Bingham, a senior English and marketing major, shows off her unselfie.

Participants wrote unselfies, messages of gratitude and appreciation for the Wright State community.

A student in the cash cube frantically grabbed as much money as she can to donate to a fund of her choice.

Giving Tuesday Volunteers gathered around the cash cube as a participant tries to grab money.