From Wright State to House Speaker 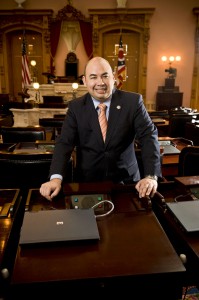 In 2012, Rosenberger graduated Wright State University with a degree in public administration/urban affairs. His framed degree hangs in his office that overlooks the Ohio Statehouse.

WSU Political Science Department Chairwoman Donna Schlagheck describes her former student as someone who does his homework, has excellent people skills and listens intently.

“I think Cliff will be a consensus builder. Even with the sizable majority he has in the House, he will reach out. It is who he is,” said Schlagheck, who coached Rosenberger for two years on Wright State’s Model United Nations team.

Read the article from the Dayton Daily News (subscription required).