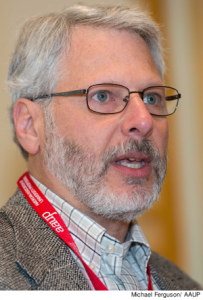 Wright State University is recognizing two faculty members who are retiring after almost 20 years of service to the Wright State chapter of the American Association of University Professors (AAUP).

Their contributions, as well as those of all of the other leaders who have served the chapter, are being honored with a series of talks focusing on the core principles of AAUP.

The Spring Speaker Series, co-sponsored by AAUP-WSU and Wright State administration is hosted in recognition of Rudy Fichtenbaum’s and Jim Vance’s commitment to AAUP.

The series continues Thursday, Feb. 5, at 1 p.m. with Howard Bunsis, an accounting professor at Eastern Michigan University, speaking on “Higher Education and State Legislatures Have All Lost their Way.” The talk will be presented in 008 Student Union (Rathskeller).

A complete listing of the Spring Seminar Series can be found on the Academe Blog.

Fichtenbaum and Vance have served in leadership positions since the founding of the AAUP- Wright State chapter. Fichtenbaum has served as the AAUP chief negotiator and Vance as the AAUP communications officer.

The two men are described as extremely dedicated. “No one else can really handle all of what they do,” said Martin Kich, president of the Wright State AAUP chapter who became increasingly involved in the AAUP leadership largely because he admired the dedication of Fichtenbaum and Vance and their commitment to AAUP’s core principles. 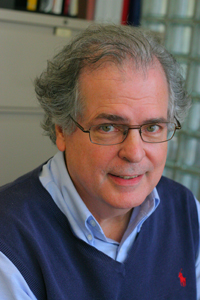 Kich said they are both being very passionate about what they do.

“They are just as passionate now as when they first started. They are continually looking for ways to enhance the working conditions and contributions of faculty at the university. They have negotiated a number of very significant protections for the faculty for instance, the ‘Garcetti language’ in our contracts that includes criticism of the university administration as expression protected under the principle of academic freedom,” he said.

AAUP is a national organization of university professors dedicated to protecting three core principles that have been acknowledged as the foundation on which the success of higher education in the United States has been built: academic freedom, or the right of faculty to express their opinions on matters related to their disciplines and on other professional matters; shared governance, the right of faculty to provide meaningful input on how their institutions are managed and especially on matters related to the curriculum and faculty performance; and tenure, or employment and economic security.

“I think it’s unusual for two people who have worked so closely together since the beginning. They’re like alter-egos; their skills complement each other,” said Kich.

Vance is very detail-oriented, and Fichtenbaum is very adept at thinking strategically. Fichtenbaum has also been very involved at the state and national level of AAUP and was recently reelected president of the national AAUP.

The executive committee of AAUP-WSU has been planning for Fichtenbaum’s and Vance’s retirements for two to three years. The two of them have taken on so many responsibilities beyond those directly related to their offices that their contributions have had to be “unbundled” so that other faculty could be recruited to cover those responsibilities. This process has involved creating two new positions on the executive committee.

There is an axiom that no one is irreplaceable, Kich said. But those who have worked with them in the AAUP leadership know that Fichtenbaum and Vance are very close to being an exception to that rule, he said.