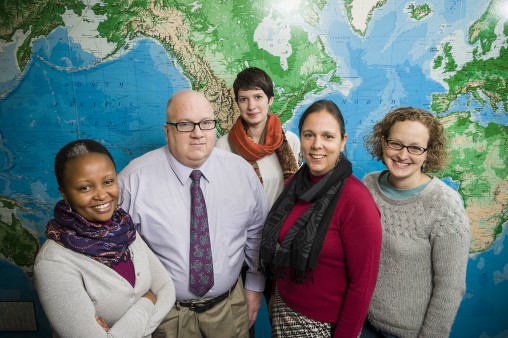 It took over a year of work with the Bureau of Consular Affairs, but this month, finally Joy Wanderi and the University Center for International Education got their wish: the UCIE is now one of six Passport Acceptance Facilities in Dayton.

“For me, when we got the news, it was like ‘I don’t believe it just happened!,’” said Wanderi, director of education abroad and exchange programs

Less than 24 hours after the UCIE first shared the news publicly the response was swift, overwhelming and satisfying.

“Oh my gosh, nonstop calls. It has been just nonstop,” said Michelle Streeter-Ferrari, director of the UCIE, who shared that much of the early surge in interest has been from people off campus.

Wanderi and Streeter-Ferrari might not have expected such an overwhelming response at first, but they knew demand was high for passport services at Wright State University. They just had to convince the State Department.

“We had to really defend our cause to the passport agency as to why we wanted this here. They asked us, ‘why should we give you this when there are already so many in the area?,’” said Wanderi.

In the end it was UCIE’s ability to extend the hours of passport services beyond what is usually offered at peer locations. UCIE could do it all week instead of limited days or hours at other locations.

“We feel confident as a new Passport Facility because of the support we get from the State Department. We now have several agents in UCIE and are committed to making international travel accessible to our community,” said Streeter-Ferrari.

Wright State students can “walk in” any time. All other requests should be scheduled by phone first, but once the materials are turned in to the UCIE, requestors can expect to receive their passport in the mail just as fast as if they had it processed anywhere else in four to six weeks. They can even be provided a tracking number.

The only current limitation is that the UCIE does not take the photos. It plans to begin offering those services in the coming weeks.

Part of the reason why requests have been so immediate is because Wright State was swiftly added to the list of Dayton Passport Acceptance Facilities on the State Department website.

“People are finding us on the list. We like that it’s a lure for people who have never really thought of Wright State as an option. It brings them here to campus,” said Streeter-Ferrari. “For us, it is a way getting people in the door.”

Adding passport services to Wright State’s campus is also in line with the UCIE’s mission and vision of fostering a global campus. To that end, there is an ongoing effort to make travel abroad easier for those who’ve never tried before.

“Offering this service here really helps the students who are considering traveling abroad because it can seem really difficult to a student when they have to get a passport. It helps demystify the issue for them,” said Wanderi.

It’s also handy for faculty and staff who plan to travel overseas for the first time or just need to renew their passport before their next trip.

“I think that when people think of Wright State, many think ‘international,’ and offering passport services only solidifies that further,” said Streeter-Ferrari.

In recent years, Wright State has become a regular leader of the Dayton International Visitor Program and host of the Council of World Affairs, has seen surging growth in international students and continues to see steady growth in its study abroad programs

“I think an institution shows that it’s really mature when it shows that it does international programs successfully,” said Streeter-Ferrari.

“We’ve joked about how it’s been said that stubbornness is a sign of leadership,” said Streeter-Ferrari. “Joy stubbornly pursued this for a long time because we believed in it so much. Now that we have it, I think it’s further proof that we are leading with our international programs at Wright State, which helps all of us.