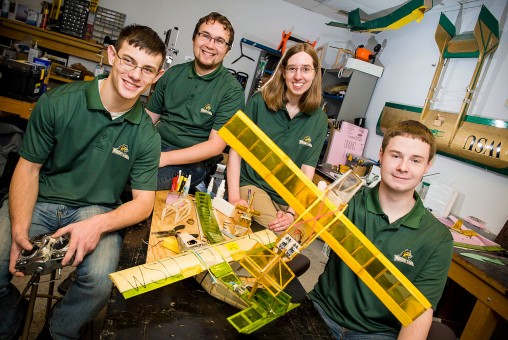 Wright State engineering students are building an aircraft to compete against 74 other teams from around the United States and the world at SAE Aero Design West in California. The team includes, from left, Nick Engel, Matt Van Voorhis, Sarah Kuntz and Adam Donovan.

It’s where four engineering students are building a lightweight aircraft that they hope will soar above the rest at an international competition, SAE Aero Design West, April 24–26 in Van Nuys, Calif.

They will compete against 74 teams from around the United States and other countries like Canada, Brazil, India and Poland.

The students are designing their aircraft for their final project in Senior Design, a capstone class that engineering students take during their final two semesters.

Scott Thomas, associate professor in the Department of Mechanical and Materials Engineering, has advised the Aero Design Team since 2004. Wright State’s team regularly finishes in the top 10 and won the aero design competition in 2006.

All four are members of Tau Beta Pi, the Engineering Honors Society, and seek to define by example the Tau Beta Pi creed “Integrity and Excellence in Engineering.”

The team and other engineering students will display their design projects during the College of Engineering and Computer Science’s Senior Design Showcase on Friday, May 1, 2–4 p.m., in the Student Union Endeavour Room. 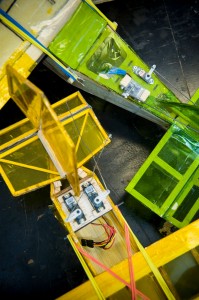 The Aero Design Team must design, build and optimize a hand-launched remote-controlled aircraft weighing a quarter of a pound or less.

In the aero design competition, teams design, build and optimize a hand-launched remote-controlled aircraft. Competition rules require that the entire aircraft must be compact, fitting in a six-inch diameter carrying case. Points are deducted for case length and assembly time.

The most crucial scoring factor is payload fraction, or the amount of payload that can be carried relative to the weight of the plane. The students’ goal is to create a plane weighing a quarter of a pound or less that is able to carry four times its own weight.

The aircraft is primarily made of balsa wood, and carbon fiber and plywood pieces may also be added for increased durability. “We’re trying to make it as efficient as possible,” Van Voorhis said.

But efficiency alone will not win the competition. In addition to the successful performance of their aircraft, the team will be judged on a design report and presentation. In engineering, being able to explain the rationale behind design choices is just as important as developing the design itself.

“What goes into the tube is completely up to the students,” Thomas said. “It’s wide open, and that’s what makes it hard.”

Frank Beafore, executive director at SelectTech GeoSpatial in Springfield, and his colleague Jade Lowrey have sponsored the team, supplying the students with materials, coaching them on design and helping them learn to fly.

“I think that they are the cream of the crop in terms of your mechanical engineering folks,” Beafore said.

He praised the students for having a well-thought-out project, understanding their goals and being “very, very sharp from a technical standpoint.”

Beafore said he is impressed with Wright State’s relationship with Dayton’s engineering community.

“I think it’s one of the premiere engineering colleges in Ohio,” he said. “All the students who I’ve met who come out of Wright State are excellent.”

An expert pilot who works locally for CSC will also travel with the team to the competition.

Thomas’ background is in thermal fluids, not aircraft design and he doesn’t teach classes on the subject. Instead, he has learned on his own and with his aero design students.

“Over the course of those years, I learned with the students,” he said. “They would push me, and I would go and do some research and come back with information for them. We would develop a method to systematically go through the process.”

It’s been worth it. Thomas said it’s “awesome to watch” his students grow over time as they work on their project.

The Aero Design Team members, who all shared classes before forming the team, have been planning for the competition since last February, when they approached Thomas about working together.

“I couldn’t think of any people at the university who would be better to work with,” Kuntz said.

They were especially interested in working on a hands-on project so they could apply what they have learned to an actual problem. Over the Fall Semester, they built and tested several versions of their aircraft.

“The whole reason I got into engineering in the first place is because I wanted to use math to address real-world problems,” Kuntz said. “You get to make a cardboard boat and float it across a pool — now that’s pretty neat. You get to make an airplane and take it out there and fly it and watch it crash.”

By the time they get to California they should soar.

Learn more
The Wright State Aero Design Team is seeking additional sponsors. For more information on sponsorship opportunities, contact Mitch Heaton, director of development for the College of Engineering and Computer Science, at mitch.heaton@wright.edu or (937) 775-5087.