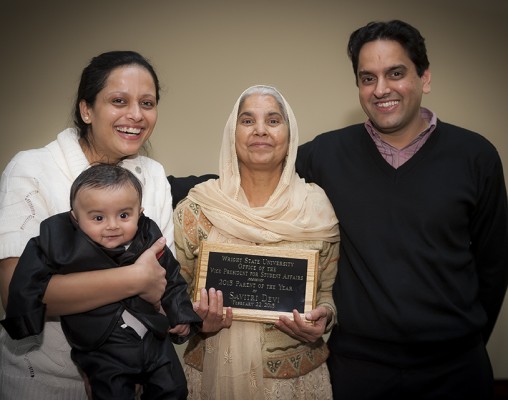 Wright State graduate student Sonal Supriya with her son Prabhav at left. Parent of the Year Savitri Devi stands in the middle with her son (and Sonal’s husband) Jayant at right.

Wright State University’s Parent of the Year Award was presented to Savitri Devi, a student’s mother-in-law from India who traveled to Dayton in support of her daughter-in-law Sonal Supriya’s pursuit of achieving her dream: getting a college education. Supriya is a graduate student in the Raj Soin College of Business.

In nominating her mother-in-law for the award, Supriya said Devi is a “true enabler” who has made their family’s dreams come true through her commitment to supporting her son, Supriya, and her grandchild through hardships that would have derailed almost any prospective student from even starting their college career.

“Despite being uneducated, she knew the importance of education,” wrote Supriya in her nomination letter of Devi. “Today, if I am studying at Wright State then I have only my mother-in-law and her altruistic intentions to thank. Managing studies with a demanding schedule of taking care of an infant and a household would not have been possible without her. To the world, she may be my mother-in-law but to me she is my Mother.”

A three-member committee of Wright State staff members reviews the nominations, which include a 500-word essay.