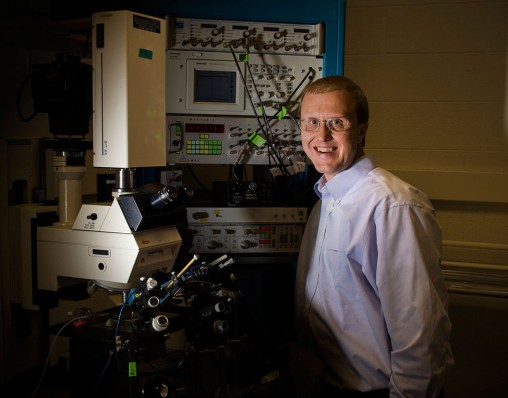 Mark Rich, professor of neuroscience, cell biology and physiology, is leading a collaboration with clinicians at Johns Hopkins Medicine to determine whether they can help paralyzed patients after overcoming sepsis infection.

Hooked to ventilators and unable to move, critically ill patients in intensive care units suffering from sepsis might regain muscle use if a clinical trial of a new treatment being developed as a result of research underway at the Wright State University Boonshoft School of Medicine is successful.

Sepsis is a full-body inflammatory state often caused by serious infection. It is a complication among severely ill patients in the intensive care unit of hospitals. Pneumonia, abdominal infection, kidney infection or bloodstream infection can lead to sepsis. Sepsis can lead to multisystem organ failure, coma or death.

Neuroscientists at the Boonshoft School of Medicine and the College of Science and Mathematics are collaborating with clinicians at Johns Hopkins Medicine to determine whether they can help patients who are weakened to the point of paralysis after overcoming sepsis infection.

Lead researcher Mark Rich, M.D., Ph.D., professor of neuroscience, cell biology and physiology at Wright State, has devoted a large part of his career studying the cause of paralysis in patients with critical illness myopathy.

Twenty-one years ago, he first encountered patients with sepsis during his fellowship in nerve and muscle diseases.

“It was incredible seeing these patients,” Rich said. “Nobody knew why they were paralyzed.”

“This was a new discovery,” Rich said. “No one had thought there was a problem with this cell type.”

Mark Rich will be one of the neuroscientists, engineers and physicians who will work side by side in Wright State’s Neuroscience Engineering Collaboration Building when it opens in April.

Rich and his team published their findings in the January 2013 Journal of Neurophysiology.

Since then, they have worked to find the cause of the misbehaving motor neurons. Various proteins have different roles in the action potentials. Some of the proteins are fine, but there is a subset that has difficulty carrying specific electrical currents.

“We identified a type of sodium current that is altered in affected motor neurons,” Rich said. “From other research, it is known that there are drugs that can increase the current. We found a drug that fixes the problem in these motor neurons.”

Rich and his team used a drug in their experiments that is approved by the U.S. Food and Drug Administration for weight loss. But in this situation, the drug fixes the electrical problems of rats ill with sepsis.

Rich and his team are now writing a paper with information about the drug for publication in a medical journal.

“If it pans out, it will be incredible,” Rich said. “If the drug works, it will fix the problem within an hour. However, this is not a cure all.”

The patients will still have muscle problems, but Rich hopes that this drug will help them begin to move again so they can recover more rapidly and lead more normal lives.

Medical breakthroughs like this are the result of collaboration and cross training.

“The clinicians who take care of these patients with sepsis would not have guessed that this particular drug would alleviate paralysis in sepsis patients,” he said. “By teaming up and collaborating, I can do the research and identify the drugs that might work. They can do the clinical trial.”

Rich explained that this sort of collaboration is the goal of Wright State’s Neuroscience Institute, which conducts cutting-edge, grant-funded neuroscience research and related clinical trials; attracts talented physician scientists and researchers; and enhances neurological care in areas of critical need for a growing patient population in the region.

“The long-term goal would be for this sort of thing to happen within the Neuroscience Institute,” he said. “As we grow and get bigger, this will become more common.”

In April, the Neuroscience Engineering Collaboration Building will open on the Wright State campus. The 90,000-square-foot facility has been constructed centrally within the biomedical and engineering research hub on campus.

The building will bring together the scientists and physicians affiliated with the Neuroscience Institute and Wright State’s systems research engineers to create a unique synergy between biomedical research and engineering.

This signature building will be home to translational research and collaboration with highly integrated laboratories, core resources and interactive student spaces.