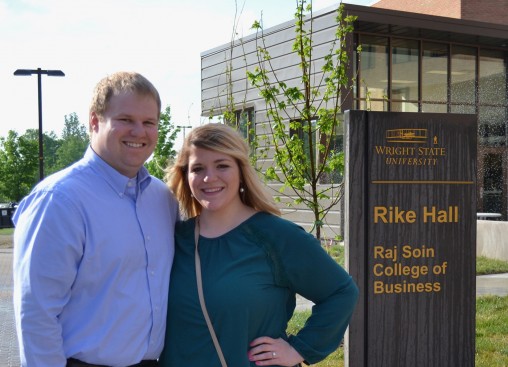 Wright State alumni Sarah Alice Throckmorton ’12 and Luke Alan Keiser ’13 were recently engaged in the Rike Hall classroom where they first met in 2009.

By Nicole Craw, assistant director of alumni marketing and communications

For the last several months, the Wright State Alumni Association has shared many stories of what we call “Raider Romance” both on our website and on social media.

One “Raider Romance” struck us as particularly special, because it involved two dedicated volunteers of our Graduates of the Last Decade (GOLD) Alumni Society — and it even involved a tiny white lie by the groom-to-be about a GOLD board meeting to get the bride-to-be in the right place at the right time.

Sarah Alice Throckmorton ’12, who graduated with a B.S. in Organizational Leadership, and Luke Alan Keiser ’13, who received a B.S. in Finance, first met in the Accounting Leadership Program as freshmen in fall 2009. Though both of them eventually moved on to graduate from different programs, they each had a vague memory of that first meeting.

Alumni Association: You two didn’t start dating until several years after your first meeting, correct?
Sarah Throckmorton: In the winter of 2011, I met my best friend Malia Watson Neal ’12 in ENG 333 in the basement of Dunbar Library. I never remember seeing Luke again after our ACC204 class in the fall of 2010. He remembers I was the girl missing all the classes because I had mono and still got better grades than him! In September of 2014, Malia sent me a photo of a guy she wanted to set me up with — it was Luke! I stared at his photo on my phone and she passed along info from Luke’s coworker’s fiancé who played matchmaker with Malia. I replied, “I think I know him. … Did he major in accounting at Wright State?” The rest is history!

AA: Tell us about the proposal.
ST: I serve on the board for GOLD and Luke contacted the president, Sam Bernard, and had Sam call an “impromptu” meeting for Friday, May 10, in Rike Hall to “tie up some loose ends.” I was suspicious! On Friday, we arrived at Rike Hall and I was so confused that my crazy theory of him setting up this fake meeting was wrong when another board member was waiting inside for our “meeting.” Luke said, “Let’s go see the classroom we met in,” where we had ACC 204. When we got downstairs, there were flowers sitting outside the door, and next to them, a ring box. And Luke asked me to marry him! Between my tears I said, “Yes!” and then heard someone taking photos. I turned around to see Malia capturing the moment!

AA: Luke, why did you want to do it on campus?
Luke Keiser: It was where everything started. We were both in the same small group starting as accounting majors and hadn’t talked for five years, only to find our friends trying to set us up on a blind date. I tried to think of the best and most memorable location and couldn’t think of any other reason to not tie everything back to that one spot — the place where we met.

Do you have a ‎Raider Romance‬ story to share? Tell us!