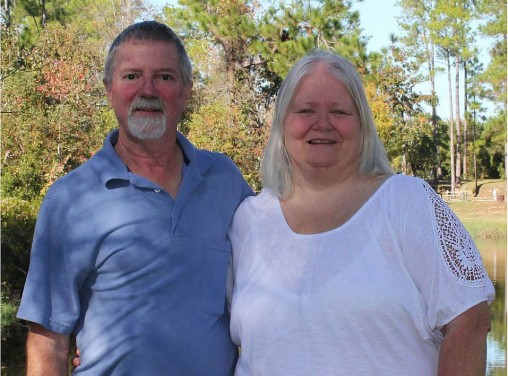 When Lee Vance’s wife, Donna, signed him up for a free skin cancer screening event at the Wright State Physicians Health Center, they had no idea it would save his life.

When Lee Vance’s wife, Donna, signed him up for a free skin cancer screening event at the Wright State Physicians Health Center, they had no idea what a life-saving decision that would turn out to be.

His wife had gone to their family doctor for a routine checkup and asked about an area of concern on her arm. The doctor referred her to a dermatologist, but she couldn’t schedule an appointment before leaving for a 10-month road trip in their 33-foot motor home.

So, when she learned about the free skin cancer screening event sponsored by the Wright State University Boonshoft School of Medicine, Wright State Physicians Dermatology and Premier Community Health, she signed up for a free appointment.

But when Julian Trevino, M.D., professor and chair of the Department of Dermatology at the Boonshoft School of Medicine, saw her husband at the skin cancer screening event, he became concerned about a spot he saw.

“It looked like it could be melanoma,” Trevino said. “But the Vances were getting ready to leave for their 10-month trip. I knew we had to help Lee as soon as possible.”

The Vances, who are from Englewood, did not want to postpone their trip because of her mother’s 90th birthday celebration in Rochester, N.Y., that had been scheduled for months. Siblings, children, grandchildren and cousins were coming together to celebrate the momentous occasion.

“It was an event that we did not want to miss,” Vance said.

“In under a week, we were able to diagnose Lee and completely remove his melanoma.” Trevino said. “This annual skin cancer screening program does save people’s lives.”

According to the American Cancer Society, more than 2 million Americans are diagnosed with basal and squamous cell cancers each year. Melanoma, the most serious type of skin cancer, will account for more than 73,000 cases of skin cancer. It is almost always curable when it is found in its early stages.

Warning signs of melanoma include changes in size, shape or color of a mole or other skin lesion or the appearance of a new growth on the skin.

Vance, who is 70 and retired, was surprised but thankful that the melanoma had been detected.

“As a cancer survivor, I am well aware of the importance of early detection and treatment,” said Vance, who was diagnosed with chronic lymphocytic leukemia in 2007 and has undergone several courses of chemotherapy and a bone marrow transplant. “While somewhat shocked, I was eager to have the area removed.”

On the day of surgery, the Vances drove the motor home to the appointment.

“With my wife at the wheel, we headed for New York immediately after the surgery,” he said. “We stopped for the night before we reached Pennsylvania and traveled the rest of the way the next day, arriving in time for dinner with my mother-in-law.”

Vance encourages others to go to the free skin cancer screening event offered annually in May as part of Melanoma/Skin Cancer Detection and Prevention Month.

“Skin cancers aren’t always obvious,” he said. “This one was near a mole on the back of my neck. Regular screening can help identify skin cancer before it becomes life threatening.”

For now, the Vances will continue on their 10-month journey in the motor home traveling through New York, New England and several provinces in Canada before driving south to Florida for the winter. But they will be back for the annual skin cancer screening event in May.