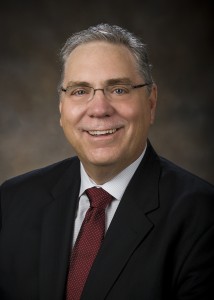 John C. Duby was appointed professor and chair of the Department of Pediatrics at the Wright State Boonshoft School of Medicine, effective Oct. 1.

John C. Duby, M.D., has been appointed professor and chair of the Department of Pediatrics at the Wright State University Boonshoft School of Medicine, effective Oct. 1, 2015.

Duby comes to Wright State from the Northeast Ohio Medical University (NEOMED) where he served as professor of pediatrics since 2008 and professor of clinical pediatrics from 2000 to 2008. While at NEOMED, he also held several positions at Akron Children’s Hospital in Akron, including director of the Division of Developmental and Behavioral Pediatrics, medical director of Rehabilitative Services and the Family Child Learning Center and director of education at the NeuroDevelopmental Science Center.

For the past decade, Duby has conducted research at the interface between developmental-behavioral pediatrics and primary care, with particular emphasis on the use of quality improvement science to support primary care practices in enhancing care for children with emotional, developmental and behavioral issues.

Since 2012 he has served as medical director for the Building Mental Wellness Learning Collaborative of the Ohio Chapter of the American Academy of Pediatrics. This quality improvement project is working with 50 primary care practices to enhance the practice culture, clinical skills and integrated care for children and families affected by emotional, developmental and behavioral issues. It is funded with $1.315 million in support from the Ohio Colleges of Medicine Government Resource Center, the Ohio Department of Health and MEDTAPP (Medicaid Technical Assistance and Policy Program), a university/Medicaid research partnership to support the efficient and effective administration of the Medicaid program.

Before joining the faculty at NEOMED, Duby was a clinical professor in the Department of Pediatrics at the Boonshoft School of Medicine from 1990 to 2000. During that time, he also held several positions at Dayton Children’s Hospital, including medical director of Child Development, medical director of Rehabilitative Services and medical director for children at the Stillwater Center in Dayton.

“We look forward to welcoming Dr. Duby back to Wright State,” said Margaret Dunn, M.D., dean of the Boonshoft School of Medicine. “His academic experience, combined with his research into ways to improve care for children with emotional, developmental and behavioral issues, make him the perfect choice to lead our Department of Pediatrics.”