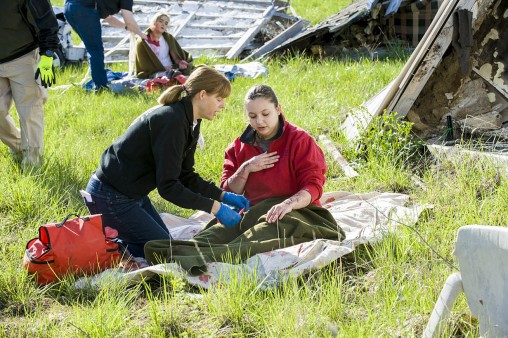 A participant treated a volunteer posing as a survivor injured in a tornado during a disaster training exercise organized by Wright State’s National Disaster Health Consortium at the National Center for Medical Readiness at Calamityville. (Photos by Will Jones)

Sitting in a car demolished by a tornado, an injured woman screams for help for her unresponsive sister. Outside the car it’s chaos.

Buildings have been wiped out. Debris is scattered throughout the area.

A handful of survivors sit on the ground, too injured to move. A woman with an apparent head injury roams aimlessly, picking up objects.

Nurses and paramedics rush into the area and triage the wounded, applying tourniquets and dressing injuries. One paramedic assesses a survivor whose shirt is soaked with blood. A team of nurses uses a long steel pole to leverage a fallen telephone pole off a victim.
With no gurney available, volunteers strap another survivor to a wooden door, which had been blown off its hinges, and carry her to a staging area, where her injuries are further assessed before she is transported to a hospital.

Another group of nurses loads a survivor into a helicopter only to be told the weather is too severe to take off safely. They regroup and carry their gurney to a pickup instead.

These were scenes simulating a response to a tornado during a weeklong training program offered by Wright State University’s National Disaster Health Consortium (NDHC), an interprofessional program designed to standardize disaster preparedness, response and recovery training.

It was the consortium’s third live training exercise at Wright State’s National Center for Medical Readiness (NCMR) at Calamityville in Fairborn. 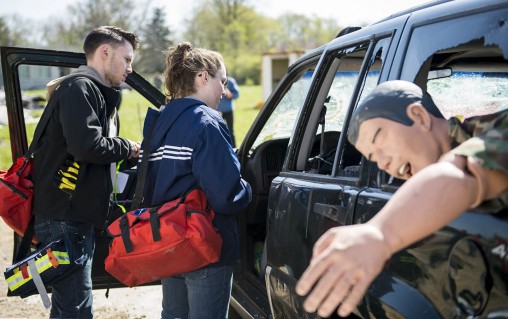 Participants assess a survivor in a car demolished by a tornado.

The program has attracted participants from around Ohio, New York, Kansas, Missouri, Florida, Maryland and Nebraska and continues to develop a national reputation.

It is presented by the College of Nursing and Health and operated by the college’s Nursing Institute of West Central Ohio in collaboration with NCMR.

Instructors include faculty from the College of Nursing and Health, Wright State’s Boonshoft School of Medicine, retired military personnel, instructors from NCMR and personnel from the Wright-Patterson Air Force Base and its Medical Center.

The program was created to help meet the goal of Homeland Security Presidential Directive 21, which calls for the creation of a common body of knowledge about disaster preparedness and training that crosses the civilian, military and humanitarian experience.

This knowledge will better allow “disasters workers — whether they come from civilian, military, wherever — to work together,” said Dan Kirkpatrick, NDHC instructor.

History shows that the United States must be better prepared for disaster response and recovery, said Sherry Farra, NDHC curriculum director and assistant professor of nursing.

Tami Ashbridge, a registered nurse and health care risk manager at the Wright-Patterson Medical Center, participated in the NDHC last spring. She praised the knowledge and experience of the instructors.

“They were truly subject matter experts in all areas of medical disaster and emergency management,” said Ashbridge, who also serves on the NDHC advisory panel and co-wrote a module on ethics and law for the program. “They were able to draw upon personal experiences, training and knowledge to ensure that the training and exercise experience was relevant, realistic and engaging.”

Participants learn the latest techniques in first aid, how to extricate someone from a car or collapsed building and how to load survivors safely into a helicopter, pickup truck, applying tourniquets and treating burns. Many of these lessons were learned during the wars in Iraq and Afghanistan, Kirkpatrick said.

But that won’t always be the case in an emergency. So NDHC participants learn how to clean and dress wounds without tape and gauze along with what they should keep in a first aid kit.

The program also covers proper ways to communicate over handheld radios and how to communicate and disperse assistance by training in NCMR’s state-of-the-art emergency operations center.

In addition, participants travel to the Dayton VA Medical Center to learn how to evacuate a hospital during an emergency.

One classroom session focuses on ethical issues in disasters. Participants are given an ethical situation and as a group must decide how they would handle it during a disaster. In one exercise, a group of people has been exposed to something causing respiratory problems. However, there are not enough ventilators for all of the survivors. So NDHC participants must decide who receives one and who does not.

Prior to the live training exercises, participants take online courses covering topics like the history of disasters, emergency management for health care organizations and leadership during disasters.

Ashbridge said the history course shows how communities and institutions have not done enough to learn from previous emergencies.

“This program is exciting because it’s a way to learn and grow from all those bad past experiences to help us do better in the future,” she said. 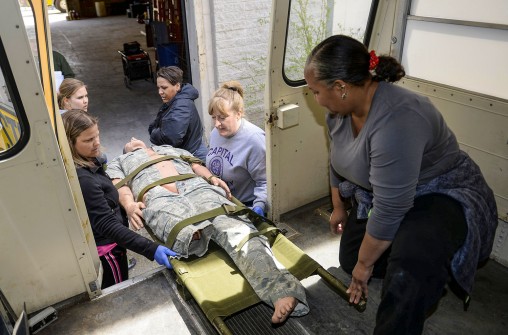 ‘Nothing goes smoothly’
On the final day of training at Calamityville, participants go through a simulated exercise in which a massive tornado has devastated a fictional town. The exercise brings together everything participants have learned over the last four days: triage, first aid and recovery, sheltering, transportation and emergency response coordination.

A live training exercise last May included 38 participants, more than 20 CONH students posing as survivors, 10 instructors and 10 evaluators observing how participants responded during the scenarios.

The exercise was meticulously planned and purposely designed to throw challenges and obstacles at participants.

Volunteers were moulaged with makeup and fake blood to mimic various injuries. One survivor was instructed to wander around and pick up the first aid kits used by the nurses and paramedics.

Participants had to search for, assess, triage and treat 10 tornado victims with various injuries, before moving them to a transport collection area. Extra supplies were not available, they were told when they called the emergency operations center, so they had to treat survivors with what they had on hand.

The exercise was designed to be stressful and challenging, said Jeff Gaylor, the lead paramedic in Wright-Patterson Medical Center’s emergency department and an NDHC instructor.

“We want to mimic real life as much as possible, and nothing about a disaster zone — a tornado or natural disaster — nothing goes smoothly,” he said. “So if we can present them with unique problems here that they might encounter in the real world it gives them an opportunity to solve it without any consequences.”

“The simulated disaster areas and stories shared through the past experiences of the instructors made it easy to imagine performing the skills learned in a true event,” she said.

In an exercise called “surge,” participants set up a temporary care center after the town’s hospital was overwhelmed with survivors.

In the shelter scenario, nurses assessed a woman with dementia who can’t remember how she got there, while another survivor had a head injury. Participants learn Red Cross shelter rules (no smoking or drinking, for instance), how to properly fill out paperwork and why they need to separate men from women.

Farra described the shelter training as one of the most important lessons NDHC participants receive.

“We train the participants on how to be a shelter worker, how to assess survivors, how to identify people that have special needs within the shelter,” she said. “It’s really a critical part.”

Kevin Mollenhauer, a registered nurse, participated in the first NDHC live training program and returned to assist with two additional exercises. He said the first aid tornado exercise was his favorite because it “ties everything together.”

He said it is invaluable to have a safe environment in which to learn and practice. “And you’ve got a great selection of instructors here,” he said.

Learn more
More information about the National Disaster Health Consortium, including registration details, is available at wright.edu/ndhc or by calling 937-775-3572.