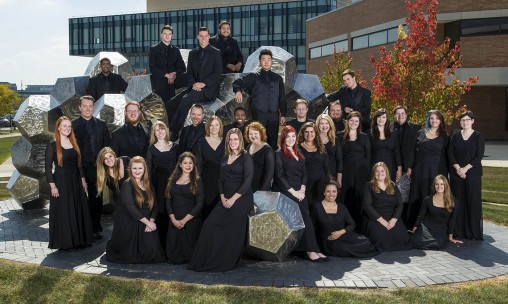 The Wright State Collegiate Chorale will perform two concerts and sing during Mass in St. Peter’s Basilica and St. Mark’s Basilica as part of a tour of Italy.

The Wright State Collegiate Chorale will perform two concerts and sing during a Mass in St. Peter’s Basilica as part of a tour of Italy over spring break.

The chorale’s 31 student singers will give full hour-long concerts on Feb. 29 at Sant Eustachio Church in Rome and on March 3 at San Filippo Neri Church in Florence.

The concerts will feature an all a cappella program of music ranging from the Renaissance to the 20th century by some of the world’s greatest composers, including Josquin des Prez, Giovanni Pierluigi da Palestrina, Thomas Tallis, William Byrd, Alessandro Scarlatti and Maurice Durufle. The choir will also perform a sampling of American folk music, hymns and spirituals, including “Amazing Grace,” “Shenandoah” and “Elijah Rock.”

“If you’re an American choir you have to sing a spiritual. It’s almost required,” said Hank Dahlman, director of choral studies and conductor of the chorale.

Dahlman will lead the tour with assistance by School of Music faculty members Amanda Roberts, Kimberly Warrick and Ginger Minneman.

The Collegiate Chorale is Wright State’s premier choral ensemble and has been internationally recognized for its technical mastery and artistic excellence. The chorale received awards from the 2012 World Choir Games and regularly tours the United States and Europe. The choir has sung in such prestigious venues as Carnegie Hall, Avery Fisher Hall at Lincoln Center, the National Cathedral in Washington, D.C., and Salzburg Cathedral. The chorale has also been invited to sing at numerous professional conferences at the state and regional level and is a frequent guest artist with the Dayton Philharmonic Orchestra.

The trip to Italy is the chorale’s fifth European tour in the last 21 years.

“It’s gong to be a terrific learning experience for students,” Dahlman said. “The idea of getting away and singing in different locations for different audiences, other than our home audiences and home location, is a highly educational thing for musicians in training.”

“It’s a wonderful opportunity for these students to learn about the history, culture, music, architecture and art of Italy, which is the birthplace of Western music in a lot of ways,” Dahlman said.

The trip is also a way to expose Wright State students to other cultures.

“In this critical time in this country, I think we need to be even more aware of the benefits of getting to know another country and see that people from Italy are just like we are in many ways,” Dahlman said.

To prepare for the Italy tour, the chorale started rehearsing in September and gave three warm-up concerts earlier this month.

The tour is supported in part by the College of Liberal Arts Dean’s Office and the University Center for International Education.