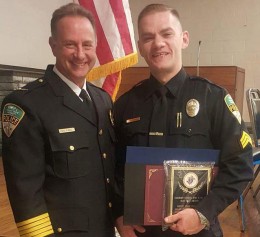 Wright State Police Sgt. Chad Oleyar was named Officer of the Year 2016 at the Knights of Columbus Blue Coat Awards.

The Knights of Columbus Blue Coat Awards honors police officers and firefighters for their service to the community.

“He was chosen this year because of his long length of knowledge in law enforcement, investigations and his positive influence on other sergeants and officers,” said David Finnie, Wright State chief of police. “He is one of those sergeants you can count on as a mentor for those who have less experience.”

Oleyar has worked in the Wright State Police Department since 2007 and was promoted to sergeant in 2011.

“He is a mentor for many and someone you can always count on to do the right thing and trust an investigation will be completed the right way,” said Finnie. “Wright State is lucky to have someone like Sergeant Oleyar, who genuinely enjoys working as a police sergeant and who has deep desire to serve the Raider community.”