A coach on and off the field 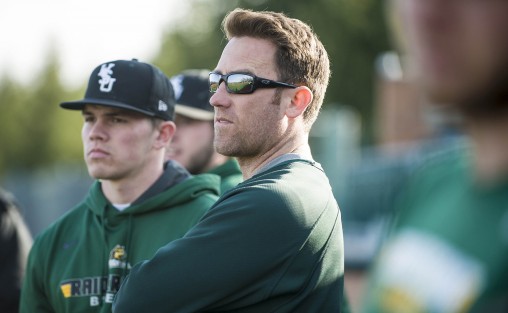 Coach Greg Lovelady led the Wright State baseball team to a first-place finish in the Horizon League and the top seed in the league tournament, which begins May 25 at Nischwitz Stadium. Lovelady was also named the league’s Coach of the Year. (Photos by Will Jones)

Through the eyes of fans a baseball game involves pitching, hitting, running and scoring — strikeouts, home runs and stolen bases.

But a good coach sees a different game: the strengths, weaknesses, potential and future of his players.

Wright State’s head baseball coach Greg Lovelady stays busy examining his 35 Wright State student-athletes and recruiting new players. While Lovelady cares about what happens on the field, mastering the game is not the only lesson he hopes his players take away.

“It’s always a challenge to make sure these kids are prepared,” he said. “It’s important that I don’t focus on wins and losses. … I want to prepare these kids to be good fathers, husbands and sons.”

“He’s a good coach, he really cares about you, and has a lot of energy and he loves the game,” said Evan Moores, a freshman pitcher. “He cares about everything. He played in college, got drafted and loves the game.”

To do well at baseball, Lovelady said, players must have skill and a good work ethic. A five-tool player can play defense and has good arm strength, power, speed and the ability to hit.

“You’ve got to be mentally tough. This game is a failure-based game,” said Lovelady, who is referred to as Coach Love by the team. “Just when you think you’ve figured it out, someone else has figured you out.”

A typical week for Lovelady, who has played baseball since he was 5 years old and has coached 15 seasons, consists of office work, recruiting players, meeting with high school coaches, attending Wright State practices, writing emails to baseball alumni and fundraising. The summer is the busiest time for Lovelady as he looks for potential high school players to recruit.

Coaching is a 24-7 job, he said. The team travels for nine weeks during the season, which takes him away from family. His phone is left on until midnight in case one of his players or a recruiter calls. When he returns home, he and his players have practice the following day.

At 3:30 p.m., the team practices while Lovelady watches the players’ forms and techniques, speed and batting skills and manages medical issues.

“He has a lot of knowledge and experience that has really helped moved me along,” said Sean Murphy, a junior catcher who is expected to be selected in this summer’s Major League Baseball draft. “He’s not the yeller or screamer type. He stays very calm for the most part, and he’s able to relate to the guys.”

Coaching generation after generation has taught Lovelady a few things about players.

“Dealing with 18-to-22-year-olds makes the world keep evolving. Kids change, every year changes, and there’s generational changes,” he said. “You have to keep adapting in this profession.” 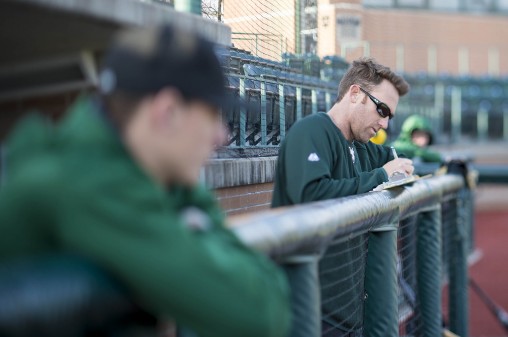 Despite the exhaustive schedule and various generational changes, the rewards greatly outweigh them all.

“The reactions and smiles on the kids’ faces going to regional championship last year after seeing all the work they put in, they deserve it,” said Lovelady. “To reap the rewards of all that hard work and the smiles on the faces is why I do this for years. I’ve done this for years, I’ve been to the college championship. I know what it feels like to do all of that, and I want them to experience it and chase their dreams.”

Lovelady stays in contact with many of his former players.

“I see the guys be drafted or be successful or they may call me when they have their first kid,” he said. “It’s all very, very rewarding for me.”

Being a family man is very important for Lovelady both on and off the field.

“He really cares about you as a person,” said Jeremy Randolph, a sophomore pitcher. “He asks about your family and makes sure we’re doing well in school. He knows it’s not just about baseball but cares for us and doesn’t want us to be robots playing for him.”

Coaching baseball at Wright State is a blessing, Lovelady said.

“I can’t imagine doing anything else. I love affecting their lives in a positive way,” he said. “I take it very seriously, and it’s very rewarding to see them do well not just in the game but in the game of life and have success at the end.”