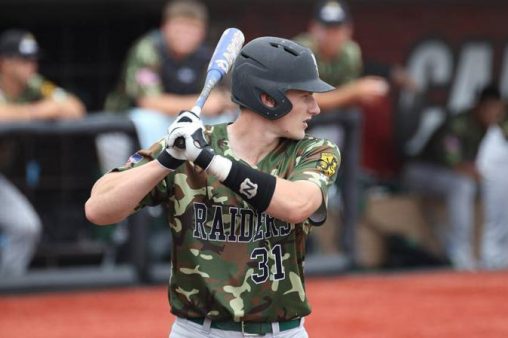 Catcher Sean Murphy was drafted by the Oakland A’s with the 83rd overall pick.

The players drafted this year are:

Murphy, who was selected by Oakland with the 83rd overall pick, hit .287 with six home runs, 34 RBI and 38 runs scored despite missing six weeks with a hand injury. He was a First Team All-League selection in 2015 and was named to the league’s All-Freshman Team in 2014. Murphy is the second-highest Wright State player ever drafted, behind pitcher Brian Anderson, who was selected third overall by the California Angels in 1993.

Scholtens pitched the first perfect game in Wright State history on March 11 against the Dayton Flyers.

He was a First Team All-Horizon League honoree, leading the league in starts with 16 and in innings pitched with 109.2 while tying for the league lead in wins with a record of 10-1. He was a Second Team All-League selection in 2015.

Roman, who was named to the Second Team All-Horizon League in 2016, tied for the league lead in stolen bases with 26, to go along with a .336 batting average, 84 hits and 54 runs scored.

Sexton returned from Tommy John surgery last season to accumulate a 7-3 record, a 3.15 ERA and 58 strikeouts.

He was named to the Horizon League All-Tournament Team as the winning pitcher against Milwaukee in the tournament finals. He also picked up a win over Western Michigan in the NCAA Regionals at Louisville, allowing three runs in 6.2 innings.