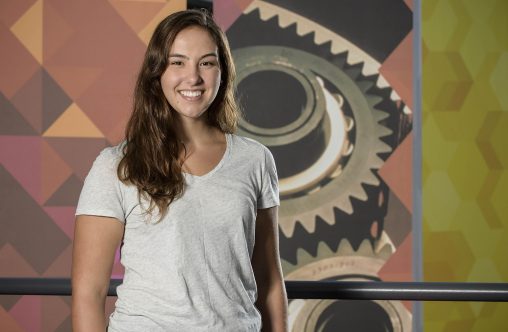 She has the grades, she has the talent, but she also has the passion.

Emma Stempfley, a freshman at Wright State, grew up in Hamilton, Ohio, graduating from Hamilton High School with a 4.2 grade point average.

She was influenced to study engineering at Wright State by her father, who works as a nuclear engineer and health physicist.

“He didn’t push me to do it, but I try my best to be like him because he’s my role model,” Stempfley said. “He has always supported me in anything I do. I want to be a successful engineer just like he is.”

As a high school student she played on the volleyball team and was a member of student council, honor society and the school choir.

Stempfley’s hard work in honors and AP courses paid off and she earned a scholarship from Dade Moeller, where her father works. The scholarship was based on her GPA, class rank, activities and jobs, honors and awards, leadership experiences and SAT or ACT scores.

Her mother, a stay-at-home mom who once worked at a flower shop, had to use prosthetics because of diabetes and other health issues. That inspired Stempfley’s growing interested in designing prosthetics, which blossomed into studying biomedical engineering.

“I originally wanted to follow my dad’s footsteps in engineering, but my mom passed in February and she’s the one who pushed me towards it,” she said as her eyes lit up and her voice filled with excitement. “I love how excited she was when she walked again, and I kind of want to make people happy and get a new feel for life. I like how happy she was.”

Stempfley grew up the youngest of four girls and is the first to go to college. Her sisters are a nurse, Marine and an electrician.

Even though her high school GPA was above average, she had to work hard to keep it that way.

“I have to study, I’m not one of those kids who can listen in class and immediately get it,” said Stempfley. “I’ve always had to work for the grade that I get.”

When she’s not studying, she enjoys working out, participating in Wright State’s Club Volleyball and Christians on Campus, singing and playing the ukulele and video games.

Wright State became her choice school for its location, 45 minutes away from her hometown, its engineering program and friendly community.

“My experience at Wright State has been that it’s easy to maneuver around campus, which is really nice, and it’s very friendly,” she said. “My adviser has helped me a lot and I don’t have any fear of getting the education that I need. And I’ve also found a lot of friendships here.”

After Wright State, Stempfley wants to work in a prosthetics office or hospital in Dayton. She is also contemplating joining the Army or Navy.