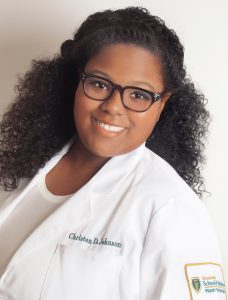 Christen Johnson, a fourth-year medical student at the Boonshoft School of Medicine, is featured on NBCBLK28 on the NBC News website.

A Wright State University Boonshoft School of Medicine student is one of 28 African Americans featured on NBCBLK28 on the NBC News website.

As part of Black History Month, NBC News is recognizing young, gifted black leaders who are innovators, vanguards, trendsetters and pioneers under 28 years old. Beginning Feb. 1, NBCBLK28 revealed one profile each day honoring artists, athletes, activists, actors, inventors, writers, musicians and others who are making a difference in their communities.

Christen Johnson, a fourth-year medical student, is featured on the NBC News website.

Listed as the doctor, the article mentions Johnson’s role as the president of the Student National Medical Association (SNMA), the oldest and largest medical student organization dedicated to serving the needs of underserved communities and underrepresented minority students who wish to pursue careers in the field of medicine.

“I am humbled and incredibly honored to be named among these 27 other individuals on NBCBLK28,” Johnson said. “I am surprised to be on a list with celebrities and Olympians.”

She hopes that her story will inspire others who dream of becoming a doctor. Johnson was raised in Columbus, Ohio, in a single-parent household by her mother.

“Coming from a home with just my mom and me, the principles of hard work and perseverance, while keeping God first, were integral to my success,” said Johnson, who earned a bachelor’s degree in biological sciences from Wright State. “I hope to be a role model for students with backgrounds like mine. I want them to understand that they can follow their dreams and reach their goals no matter where they come from.”

As president of SNMA, Johnson is working toward leveling medicine’s racial and ethnic playing field. She has worked on establishing bias training for doctors and ensuring that health policies are fair and equitable.

“To address health disparities in our nation, we need to have physicians that understand the social determinants of health, which affect all of our communities,” she said. “Diversifying the face of medicine is essential to addressing these health disparities.”

She is conducting a national study with SNMA and Yale University to describe the experiences of underrepresented medical students nationwide as they pertain to micro-aggressions and implicit bias in medical education.

“As part of my agenda for SNMA this year, we are creating a curriculum for medical schools nationwide,” she said. “This curriculum will help create more culturally competent physicians that will work better together and be better physicians for their patients. Through this curriculum, medical students will have a better understanding of how to work with colleagues and treat patients who might be ethnically or culturally different from them.”

In September 2016, she attended the Congressional Black Caucus (CBC) Health Braintrust with the National Medical Association. The CBC Health Braintrust is the authority on African American and minority health disparities on Capitol Hill. The Braintrust creates legislative and policy solutions to reduce health disparities and promote good health outcomes in multicultural communities. As president of SNMA, Johnson is working to establish an SNMA health policy and legislative affairs fellowship to encourage more students to consider adding health policy as part of their medical careers and to give them some exposure to government policy.

In October 2016, Johnson spoke in support of addiction medicine curriculum and bias training in medical education at the second White House Symposium on addiction. The event brought together federal partners and national leaders from medical schools and residency and fellowship programs to advance addiction medicine education and training.

“Physicians have a duty to advocate for their patients and the communities they serve especially when there are policies or practices that negatively affect the public,” Johnson said. “We held town hall meetings nationwide to discuss possible solutions. In addition, we participated in a host of community service events.”

Johnson will graduate in May 2017 with a dual M.D./M.P.H. degree. She is a 2015 recipient of a scholarship from the National Health Service Corps (NHSC) Scholarship Program, which awards scholarships to students pursuing primary health care professions in return for a commitment to provide health care to communities in need.

After a residency in family medicine, she plans to serve at an NHSC-approved site in a high-need health professional shortage area for a minimum of two years. Her goal is to become an academic family physician with a special interest in adolescent health.

As a future medical and public health professional, Johnson plans to be active in ensuring that health disparities are eradicated.

“Race, socioeconomics and policy will be at the forefront of the many challenges that I will face,” she said. “I hope to continue mentoring and inspiring others throughout my life’s work.”