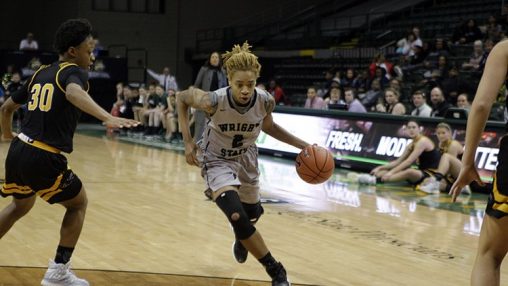 Senior forward Antania Hayes drives to the basket during the Raiders’ win over Milwaukee at the Nutter Center. (Photo by Tim Zechar)

The Wright State women’s basketball team clinched a share of its first-ever Horizon League regular season title with a 62-52 victory over Milwaukee Feb. 26 at the Wright State Nutter Center.

The Raiders tied atop the Horizon League with Green Bay; each team finished with 15-3 league records.

Wright State (23-7 overall) is the No. 2 seed in the Horizon League Tournament, which takes place at Joe Louis Arena in Detroit. The Raiders will open tournament play Saturday, March 4, against the Northern Kentucky/UIC winner at 2 p.m. The game will be broadcast live on ESPN3.