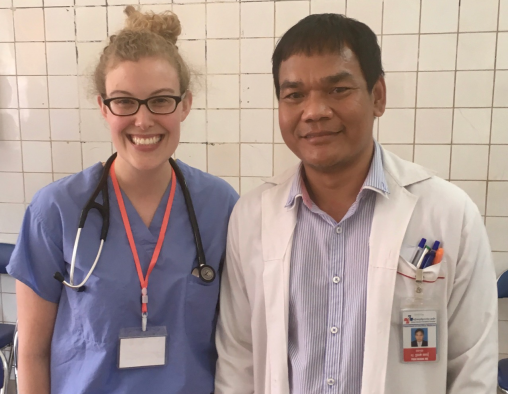 Susan Wherley, left, a fourth-year medical student, worked with Prak Narom, one of the foremost HIV physicians in Southeast Asia.

The B. Laurel Elder Memorial Scholarship has helped many students at the Wright State University Boonshoft School of Medicine travel to foreign countries to volunteer in underserved areas.

The scholarship was established in memory of B. Laurel Elder, Ph.D., a popular and esteemed associate professor of pathology. It honors her contributions to the medical school and her commitment to improving health care in developing countries.

Two of the scholarship’s recent winners have used the award to travel to countries in Southeast Asia and Africa. The financial flexibility of winning the award also allowed them to make stops in other countries.

For Susan Wherley, a fourth-year student at the Boonshoft School of Medicine from Cleveland Heights, Ohio, the travel scholarship has particular significance. Wherley was fortunate enough to take one of the last classes that Elder ever taught, where she learned about some of the professor’s volunteer work in Cambodia. Elder died in October 2014.

“Before we learned about her illness, I hoped that I might take a mission trip with her later in medical school,” Wherley said.

With help from the scholarship, Wherley went on to volunteer in Cambodia. She spent one month at Khmer-Soviet Friendship Hospital, a public hospital in Phnom Penh.

“I am grateful for every scholarship I receive, but this one was particularly meaningful to me because I was able to learn about infectious diseases from Dr. Elder as part of her last class at Boonshoft,” Wherley said. “She inspired me, and I am thrilled to be able to learn from and give back to the community where she dedicated her own volunteer time.”

Much of Wherley’s time there was spent working in the HIV ward. She was able to work with Prak Narom, M.D., one of the foremost HIV physicians in Southeast Asia. She learned a great deal about how HIV is managed in a resource-limited setting.

“While HIV drugs are offered to Cambodian patients at no cost, stigma prevents some from receiving these antiretrovirals,” Wherley said. “For that reason, I was also able to see patients with many of the serious complications of HIV that we rarely see at home.”

In addition, the patients showed her a new side of vulnerability. Much of the time, patients in the United States seem to display a stiff upper lip. That wasn’t the case in Cambodia, where patients were openly concerned with their conditions.

“It is likely that our patients at home feel just as vulnerable as our Cambodian patients do — they just don’t always show it,” Wherley said. “It was a reminder to me of the importance of showing empathy to every patient.”

In Cambodia, the lack of intensive care technology means that patients often become very sick very quickly and die while uncomfortable or in pain. “There is still so much work to be done to ensure that all people — especially the most vulnerable among us — have access to basic health care,” she said.

With help from the scholarship, Wherley was able to afford another volunteer trip to Lesvos, Greece, where she helped in refugee search-and-rescue missions.

The trip to Cambodia marked her completion of the international health program at the Boonshoft School of Medicine. 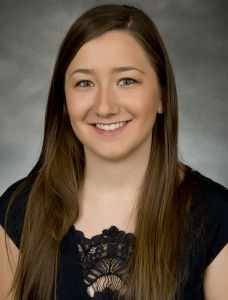 Nicole Hogan, a fourth-year student at the School of Medicine from Perry, Ohio, has also just completed a similar program. The travel scholarship made it possible for her to work in Cape Town, South Africa, for four weeks.

“I worked in a government hospital, observing local doctors and residents on a general inpatient medicine team,” Hogan said. “I had the opportunity to see a lot of disease processes we don’t typically see here in the states, including tuberculosis and HIV, in a resource-poor setting.”

Hogan would have still traveled to South Africa even if she hadn’t received the award, but winning the scholarship gave her other options for travel beyond the volunteer trip.

“I was able to take a week off afterwards to travel to Kruger National Park, and I felt I was able to take advantage of a lot of the things Cape Town had to offer because of the scholarship,” Hogan said. “I really cannot express the gratitude I feel for receiving such a gift.”

For giving opportunities that support students at the Boonshoft School of Medicine, visit medicine.wright.edu/community/giving-opportunities.