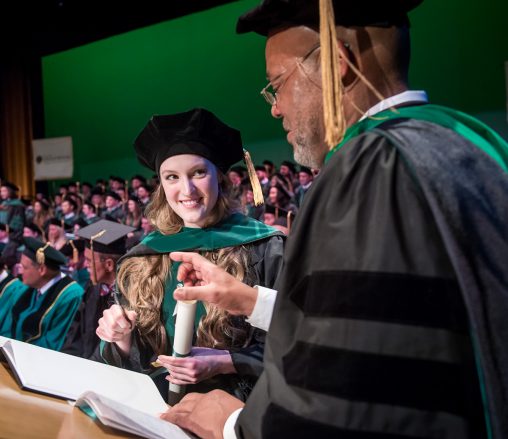 After four or more years of intense study and specialized training, 99 medical students in the Wright State University Boonshoft School of Medicine class of 2017 received their M.D. degrees during the school’s graduation ceremony at the Victoria Theatre on Friday, May 26, in downtown Dayton.

In July, the graduates will begin prestigious residencies and receive advanced training in the medical specialties of their choice. The new physicians will enter outstanding residency training programs in Dayton, throughout Ohio and nationwide, including the Boonshoft School of Medicine, Case Western/University Hospitals Case Medical Center, University of Michigan Hospitals – Ann Arbor, Wake Forest University and Yale University – New Haven Hospitals. (See medicine.wright.edu/match for me details).

More than 40 percent of the Wright State graduates will remain in Ohio during residency, and about 22 percent will remain in Southwest Ohio. Almost half (48.5 percent) will enter a primary care field (family medicine, internal medicine or pediatrics).

Vivek H. Murthy, 19th U.S. surgeon general, delivered the commencement address. The son of immigrants from India, Murthy discovered a love for the art of healing early in his childhood while spending time in his father’s medical clinic in Miami, Florida. He earned his bachelor’s degree from Harvard University and his M.D. and M.B.A. degrees from Yale University. He completed his residency training at Brigham and Women’s Hospital in Boston and Harvard Medical School, where he later joined the faculty as an internal medicine physician and instructor.

Each year the graduating class presents an Appreciation Award to recognize an individual or organization that has made a significant contribution to the Boonshoft School of Medicine. The class of 2017 honored the Montgomery County Medical Society Alliance. The alliance promotes the health of the Dayton community through education and philanthropic activities. The volunteer organization of female physicians and physicians’ spouses has made a lasting impact. Almost 40 years ago, the alliance established a foundation to provide scholarships to students in health-related career programs and to fund the promotion of community health. In the past fiscal year, the alliance gave more than $25,000 in scholarships to students at Wright State University. It also gifted tens of thousands of dollars in support of work at Reach Out of Montgomery County, local food banks and the Domestic Violence Shelter at the YWCA.

In addition, the alliance works with dermatologists in the area, including Boonshoft School of Medicine alumni, to promote sun safety awareness among school-age children. This effort has resulted in more than 60,000 students learning about the importance of skin protection.

Margaret M. Dunn, M.D., dean of the medical school, presented the Dean’s Award to graduating student Ashley Subler, for demonstrating a commitment to academic excellence, embodying empathy and compassion toward others, exemplifying personal integrity and professionalism and earning the respect and trust of classmates and faculty.

The Teaching Excellence Award was presented to John Donnelly, M.D., professor, family medicine, and associate professor, population and public health, who was selected by the class of 2017 as the faculty member displaying outstanding professional skill and pride in discharging his instructional duties.

The Leonard Tow Humanism in Medicine Award was presented by The Arnold P. Gold Foundation to graduate Joel R. Barnett and to faculty member Kate Conway, M.D., assistant professor and director of medical education in the Department of Family Medicine, for consistently demonstrating compassion and empathy in the delivery of care to patients.

The American Medical Women’s Association Janet M. Glasgow Memorial Award was given to Marguerite Sullivan, who is graduating first in her class.

The American Medical Women’s Association Janet M. Glasgow Memorial Achievement Citations were given to Katherine Ochs, Susan D. Wherley and Marguerite Sullivan, who are graduating in the top 10 percent of the class.

The Glenn C. Hamilton, M.D., Excellence in Emergency Medicine Award was given to Trevor J. Skrobut, recognizing interest and accomplishment in emergency medicine.

The Society for Academic Emergency Medicine Award was given to George R.J. Sontag, the graduate who has demonstrated outstanding proficiency in emergency medicine.

The Walbroehl Award for Family Medicine was given to Nidhisha R. Anireddy, for excellence in family medicine.

The Geriatric Medicine Award, sponsored by the Ohio Department of Aging, was given to Chad J. Hyer, for excellence in the study of geriatrics.

The Homer Cassel, M.D., Award was presented by the Dayton Society of Internal Medicine in honor of the late Dr. Homer D. Cassel, to David G. Herman and Sara E. Yacyshyn, for outstanding scholarship and commitment to the specialty of internal medicine.

The Department of Pediatrics Award was given to Stephanie A. Ahlers, who is committed to a career in pediatrics and has shown outstanding performance in pediatrics during the clinical years.

The Dan W. Elliott, M.D., Award was presented to Laura Wolgamott, who is committed to a career in surgery and has shown outstanding performance in surgery during the clinical years.

The Reach Out of Montgomery County Student Volunteer Appreciation Award was given to Melissa K. Quick.

The Global Service Award was presented to Christopher J. Farmakis, who has a history of volunteering and rotating in a medically underserved area internationally.

The 2017 Excellence in Public Health Award was given to Nicholaus J. Christian.

The John Worthman, M.D., Award was presented to Seth Wilson, for entering into the Wright State University Family Medicine Residency.