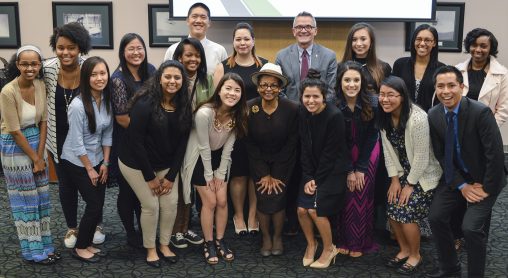 The end of the academic year at Wright State University is the perfect time to celebrate student success. Night of Scholars on April 23 in the Student Union recognized first-year students to graduating seniors for their accomplishments and contributions.

Night of Scholars is a collaboration between Wright State’s C.J. McLin Jr. Scholars Association and the Wright State branch of Alpha Lambda Delta (ALD), National Academic Honor Society for First-Year Students. Hosted by First-Year Programs, the Night of Scholars brings students, faculty and staff together to celebrate student success at the end of spring semester.

Former Dayton Mayor Rhine McLin was the special guest and personally congratulated the C.J. McLin Jr. Scholars. Her father, C.J. McLin Jr., is the namesake of the association and his legacy continues to inspire Wright State students. A leader in civil rights and the Ohio Democratic Party, he served 11 consecutive terms in the Ohio Legislature. He is credited with improving race relations in Dayton following riots in the 1960s.

“The members of the C.J. McLin Jr. Scholar Association work hard each year, and this year they completed more than 580 service hours,” said Kim Stephens, coordinator of First-Year Programs in University College at Wright State. 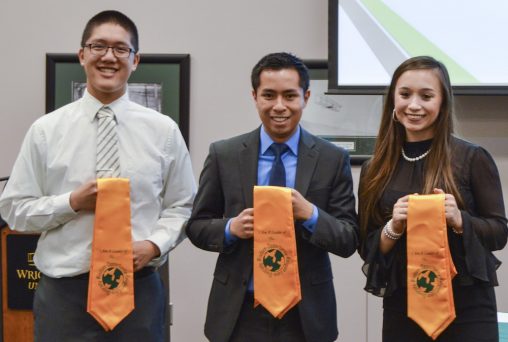 The evening began with a saxophone quartet from Wright State’s School of Music. During the reception, families of the McLin Scholars and Alpha Lambda Delta inductees had the opportunity to meet Wright State faculty and staff and learn about these and other initiatives geared toward helping students succeed and graduate.

Wright State’s Alpha Lambda Delta chapter held its annual induction ceremony, as well. An honorary society for first-year students, ALD has existed on campus since 1987 and is administered through University College. Membership is by invitation to students who earn a 3.5 GPA or better during their first year.

Sixty students, as well as 16 honorary faculty and staff members accepted the invitation to join the chapter. ALD members are eligible to apply for 18 to 20 $3,000 graduate fellowships that are offered each year.

Wright State has been celebrating student success for 50 years. The university celebrates its 50th anniversary as an independent public university in 2017.