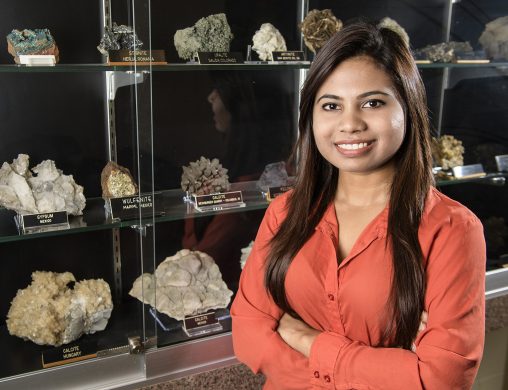 Ritu Ghose, who graduated with a master’s in earth and environmental sciences, studies geology to help boost the economy of Bangladesh. (Photo by Erin Pence)

“Different types of rocks have different histories,” she said. “By studying a rock sequence you can discover interesting things such as whether it was deposited in an ocean or land environment or what type of organisms were present during that time of deposition.”

Studying geology also allows her to determine the direction of the wind when the rock was deposited, based upon the texture and details of the rock, she said.

For Ghose, who graduated in April with a master’s in earth and environmental sciences from Wright State, studying geology provides an opportunity to better the economy of Bangladesh through the use of fossil fuels.

Wright State was a natural fit since the university could provide Ghose opportunities to conduct research in her field. In the summer of 2015, she was offered a fellowship and later a graduate teaching assistant position in the Department of Earth and Environmental Sciences in Wright State’s College of Science and Mathematics. She studies reservoir geology with a focus on hydrogeological and petroleum geology.

Ghose has a vision of earning her doctorate degree and becoming a petroleum geologist working in gas discovery and production in her home country.

“Bangladesh is a developing country, and the energy sources are something that can boost the economy of the country,” she said. “I’d like to join the exploration team in my country and work to identify gas deposits.”

She participated in a reservoir study to analyze how the variance in sedimentary attributes controls the petrophsyical properties that control carbon dioxide movement and trapping in a reservoir rock. A reservoir rock stores gas, oil or other fluids in its subsurface.

Ghose researched the geological sequestration of carbon dioxide by working with the Center for Geologic Storage of CO2, for her thesis. Wright State partners with Illinois State Geological Survey, University of Illinois-Urbana Champagne and other universities and companies throughout the country, on the project, which is funded by the U.S. Department of Energy.

“From my point of view, we’re still relying on fossil fuels until the point comes when we can completely rely on solar energy or other environmentally friendly sources,” she said. “Until then, we need to continue our exploration and production for the fossil fuels.”

While Ghose came with the knowledge of her field, transitioning into a new culture provided a challenge.

She noted that American students may put their feet up on the back of chairs, something that is disrespectful in her culture. Students may also send texts or eat in class with little staff intervention, unlike her experience in Bangladesh.

She added that many students in Bangladesh memorize material instead of applying what they’ve learned to their projects since they are often taught much information and have difficult exam admissions.

Her experience with higher education at Wright State has been a positive one, observing how school is designed to be student-friendly.

“Americans smile a lot,” she said. “You don’t know a person and they’ll pass you and smile at you, and I like that a lot. That’s very friendly and welcoming.”

Ghose also does classical Indian dancing and has performed for many events, including the Wright State International Festival. She is also the event coordinator for the Bangladesh Student Association at Wright State.